The Australia based mining services company Management Resource Solutions (MRS) has announced several statements to the market in recent weeks updating on commercial matters and the company’s suspension from AIM, which has been in effect since 27th October.

Firstly, at the AGM held on 19th December all resolutions were defeated. As a result Chris Berkefeld will no longer be a non-executive director of the company but will act on a consultancy basis in the short-term. Additional non-executives are expected to be appointed shortly.

MRS was also seeking authority from shareholders to issue new shares at the AGM but this item was also defeated. To issue new shares the company will now have to seek shareholder approval, but this does not apply to matters contracted prior to the AGM, including the issuance of shares to the vendors of the acquired Bachmann Plant Hire business as part of its acquisition terms. In any case, MRS has stated that there is no pressing requirement to issue new equity for cash as it has adequate financial resources for its continuing businesses.

Regarding the deferred consideration to Bachmann, a A$1,333,333 payment is now due to the vendors following the business hitting targets set for the year to June 2016. MRS intended to pay this by way of new shares following its resumption to trading on AIM. However, it has now come to light that former CEO Paul Morffew, prior to his dismissal on 28th October, made a payment of A$500,000 in cash to the Bachmann vendors in partial settlement of the amount due. This was done without the knowledge of the rest of the board.

The outstanding balance of A$833,333 will now be paid via the issuance of new shares in MRS at a price of 13.7375p per share, as per contracted terms. The unauthorised A$500,000 cash payment has been treated as payment against a A$1.8 million loan due to the Bachmann vendors, with the A$500,000 due as deferred consideration to be paid for by the issue of new shares, priced at the 10 day mid-market closing price per share following resumption of trading on AIM.

On a brighter note, trading in the continuing operations of Bachmann Plant Hire and the recently acquired SubZero business (now named MRS Services) is said to be positive. Bachmann Plant Hire continues to meet expectations, with a “strong pipeline” of business in place, and since acquisition on 30th September MRS Services has secured additional contracts and orders worth c.A$10.4 million over the next year and is in the final stages of negotiating an additional A$2.7 million of work for the period.

Elsewhere, the company’s consulting business has been closed following cash shortcomings having been discovered in its two remaining contracts, with PEAL in Papua New Guinea and with Aiotec in New South Wales. MRS will be seeking to recover amounts due under both contracts, which have been terminated. As a result of the closure of the consulting business annualised cost savings of approximately $1.5 million have already been realised.

In terms of financing, MRS has agreed an invoice financing facility of up to A$6 million with Hermes Capital Australia. Combined with annualised savings of A$2.5 million having been made, along with undrawn existing facilities of approximately A$700,000, MRS believes it has adequate headroom for the foreseeable future. The agreement of this facility was driven by the non-receipt of amounts under the consulting contracts and funds raised to finance the acquisition of SubZero not being applied to working capital as expected.

Finally, MRS management are working on the completion of the annual accounts to 30th June 2016, which under AIM rules must be released by 31st December. While MRS is attempting to meet the deadline it cannot guarantee that it will be met and as such trading in the shares will remain suspended.

With many variables having changed, some quite dramatically, since our initiation of coverage on MRS, we will be revisiting our forecasts upon the publication of the results for 2016. While some aspects will remain unclear until then, we make several observations about the recent developments.

Firstly, the closure of the consulting business is disappointing but should not have too much of a negative effect on the long-term success of the business. As the chart below shows, the division (MRS Group) had been in decline in 2016 and was only expected to make up c.15% of the group’s pro-forma revenues post the acquisition of Sub-Zero. Substantial cost savings have been made since the closure of the business and there could be a boost to the balance sheet should due amounts be recovered. 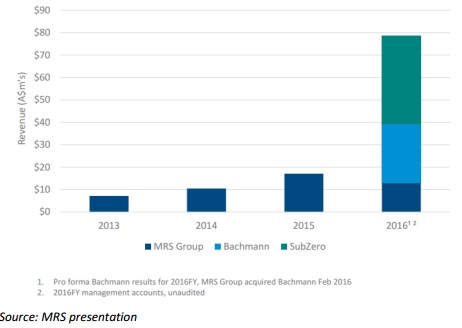 Secondly, we note the strong performances of the remaining operations, MRS Services in particular. Securing an additional A$10.4 million of contracts is an impressive performance, especially in the context of the A$40 million of pro-forma annual revenues which it posted in the year to June 2016. This is further evidence of a recovery in the Australian thermal coal mining industry which the business specialises in. Thermal coal prices have recently broken through $100 a tonne for the first time since 2012 and have doubled over the past 12 months, fully justifying MRS’s decision to buy the business when the coal price was at the bottom of the cycle.

Management Resources Solutions (MRS) is a research client of Align Research. Align Research holds an interest in the shares of MRS.