We last wrote about GRIT HERE in which we highlighted the massive dislocation in value between the stock price of GRIT and the company’s underlying NAV. At the time, the company was considering a proposal put forward by Primestar that was thankfully kicked into the long grass in the final analysis. The stock was trading around 5.5p when we released our recommendation and since this point the shares rose towards the 10p level before returning to the current 6.5p price. We believe that the shares once more offer tremendous value.

It has been an eventful 2016 for GRIT with the following key events: in the first instance the company released their full year results on the 29th April and the key takeaway here was the writing down to zero of their holding in Arakan Resources. This had the effect of reducing the NAV to 25.7p at that point from previously being reported in the early 30p’s. This move was a conservative measure and we understand that there is in fact the potential for a partial write back in relation this this holding in the future dependent upon the outcome of litigation by Arakan against the Kyrgyz Republic but as a holder personally, I believe the accounting treatment of this to be wholly appropriate and am encouraged by the realistic and conservative approach applied by the Directors of GRIT. 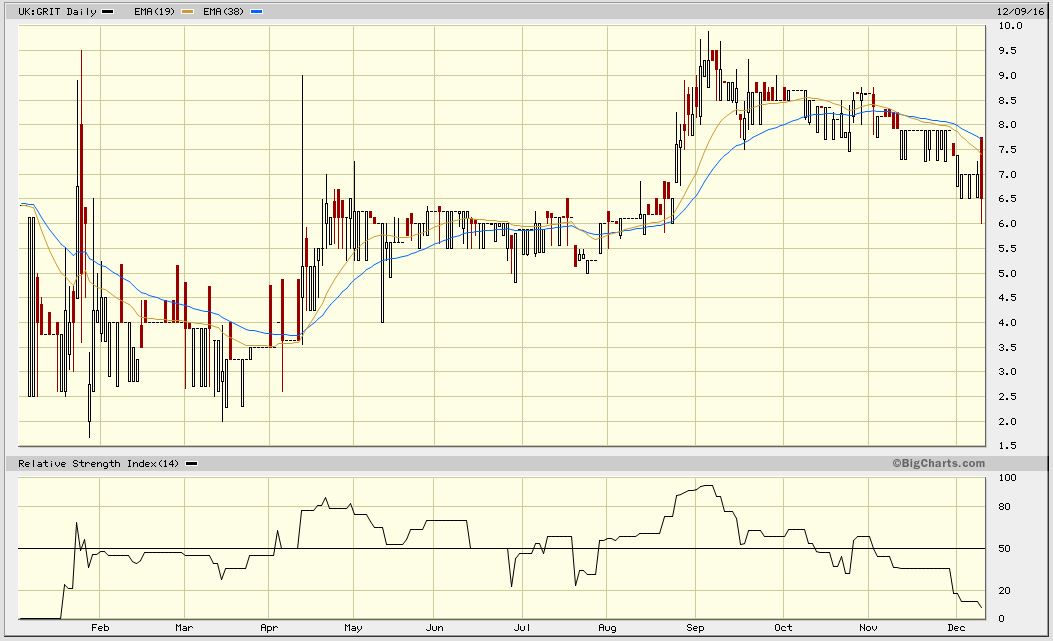 Secondly, in revisiting the original structure of GRIT, readers will recall that the way this particular trust worked was that the vast majority of the NAV was comprised of “stock swaps” with the investee companies – that is those constituent companies swapped equity in themselves for a stake in a basket of diversified resource plays. The intent for almost all of these companies was of course to sell out of the trust shares and monetise their respective stakes to progress their own projects. The wave of selling was one of the two reasons (the other being a generational record breaking bear market in resource stocks between 2012 and early 2016 of which we flagged the bottom HERE) for the almost total collapse in the stock price – there was simply a race to monetise at the worst possible point for many of the investee companies. Of course, from this situation, opportunity was born. Aside from myself, it seems that Australian entity Saso Investments was the other party to spot the re-rating potential and Saso declared themselves (at the last holding RNS) to now hold just over 17% of GRIT’s equity. This new shareholder has (along with myself) effectively mopped up the remaining original investee sellers that had overhung the stock price.

The company then announced on the 28th June the intent to raise approx £2m by way of new stock issuance but this was also abandoned. Again, my understanding is that comment from other major shareholders deemed this to be too dilutive and I have to say I agree.

The substantial rebound in resource plays and in particular precious metals (of which GRIT had a heavy bias) was the Company’s (and its shareholders) good fortune as this created renewed demand for many of the portfolio constituents. As a consequence of this, the portfolio managers have been able to exit from a number of the outperformers within the portfolio and be in a position to redeem circa almost all of the loan notes held by LIM Asia Capital bar £1.5m outstanding. With the Merrex Gold announcement today of IAMGold’s 100% acquisition of their equity at 20c equivalent in IamGold paper, shareholders should be thankful for the Xmas angels given the cancellation of the sale agreement at 17c. This position alone is worth almost 8p per share to GRIT.

With the very vast majority of the company’s portfolio being denominated in dollars, the material pound weakness seen since the EU referendum shock exit result has been a nice tail wind to the NAV too and we understand the Company has locked in the majority of these gains in by way of a hedge.

The announcement today of the annulment of the RDP fund management contract in exchange for an initial 2m shares (of which there is a 6 months lock-in) and a further 6m shares to vest if the stock price rises to between 14 – 18p sends a very strong signal to shareholders where the managers see underlying value within the portfolio. This is particularly so when one considers that the termination fee was estimated at over £300,000. To take stock with an initial value of @ £130,000 is a very large vote of confidence in the future direction of the shares. Put simply, if the shares do not rise beyond 14p RDP would have been much better simply collecting the management fee and termination fee. Additionally the new direction of focusing upon the stronger stocks within the portfolio we welcome as the weaker holdings have been culled and management have high hopes for value realisation in relation to a few of the remaining portfolio companies in particular.

Conclusion of the news flow is that using recent holdings details on the underlying portfolio, a number of the larger quoted positions within the trust have enjoyed substantial rallies as their investment cases have been reassessed by the market. The chart below illustrates the market’s re-rating of Junior Precious metals plays on a basket basis (the GDXJ instrument being a good global proxy). 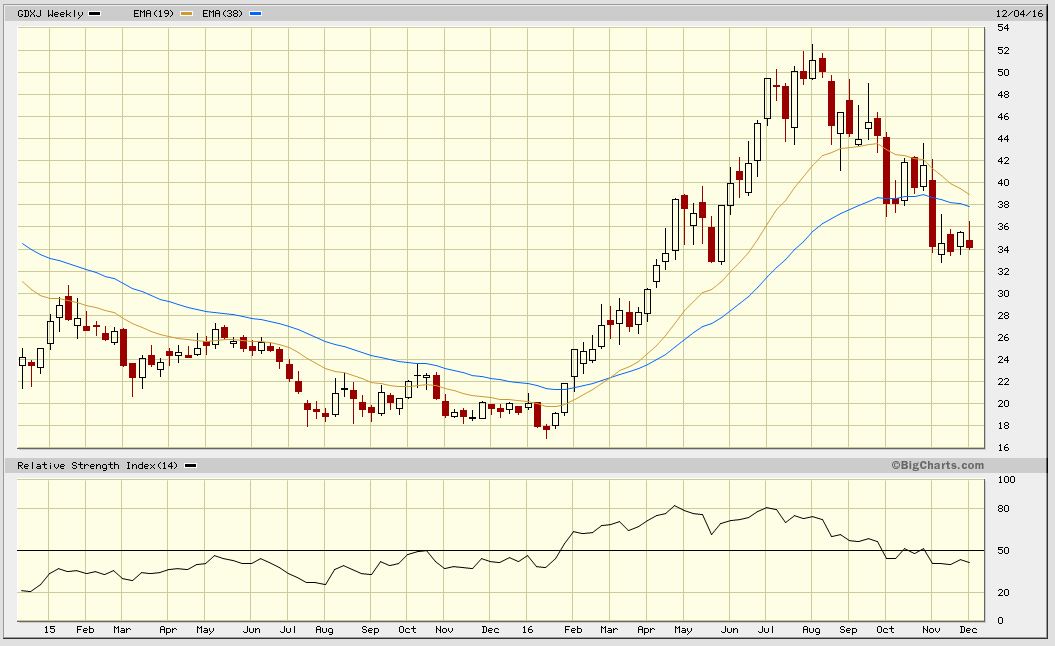 We are compiling a concise research note on GRIT for release shortly that will set out the company’s new strategy and focus in particular the prospects of the two primary investment opportunities in the trust as we go into 2017 – Anglo African Minerals (AAM) and Siberian Goldfields. Ahead of this we highlight the continued disjoint re the market price and the current NAV breakdown per below:

We make the point too that in the quoted portfolio (excluding Merrex), most of the holdings are now no longer disproportionate percentages of the respective equities floats and so a “liquidity” discount is not, in our opinion, now appropriate on GRIT stock given that the major holdings (where exits it could have been argued were problematic) have now been sold. In fact, should the resources bull run recommence in earnest in 2017 as we expect, there is a case for (a) the values of the quoted stocks to potentially rise and (b) where there are decent percents of the underlying stocks free floats that premiums could be paid by acquirers.

As the bar chart above illustrates, as more clarity is now applied to GRIT’s current structure we can see that at the current stock price of 6.5p this actually reflects a modest discount to the quoted portfolio plus cash & NET of the entire CULS repayment. There is thus zero value being attributed to the two meaningful and potentially valuable (and viable) resource plays – AAM and Siberian Gold fields. We point out that both of these holdings were signed off at the current carrying value by independent auditors in making up the NAV too. We will elaborate further on positive developments in AAM in particular in our forthcoming research note and that we believe will be materially NAV enhancing as GRIT holds almost 27% of the current equity here.

Should AAM re-list or be sold ahead of a re-list and Siberian Goldfields float in a more conducive environment in 2017 (as is the plan) there could in fact be significant upside from the current consolidated NAV of just over 20p. Accordingly, we re-iterate, with increased conviction, our price target of 20p and view the recent price weakness as an excellent opportunity to accrue stock.

CLEAR DISCLOSURE – The author of this article, who is a director of Align Research Ltd, holds a personal interest in GRIT & is bound to Align Research’s company dealing policy ensuring open and adequate disclosure. Full details can be found on our website HERE