There are big changes afoot in the way in which the UK generates its power. This green energy revolution is serving up big opportunities as the country switches to flexible power generation. Two companies that look well set to strongly benefit from the decarbonisation of the UK’s economy are Mast Energy Developments and Corcel.

The financial press and investors have become somewhat excited by the Mast Energy Developments (LON:MAST) which listed today and has continued to trade at a premium. I don’t want to spoil their thunder but Corcel got there first. Ahead today’s IPO, MAST has raised in excess of £5 million (more than the market cap of Corcel) to fund its expansion in the sustainable energy sector. MAST is involved in what is called Reserve Power demand in the UK, which refers to the use of low carbon sustainable gas to provide power to help meet the UK’s electricity needs during periods of high demand.

MAST used to be called Sloane Energy and is a subsidiary of Kibo Energy. Kibo is essentoally spinning out MAST and retaining a 55.42% interest. MAST’s initial market capitalisation on listing will be £23 million. The company is planning to develop a series of Reserve Power plants across the UK to generate electricity from clean natural gas which is then feed into the grid. These sorts of plants are critical for the renewable energy market, which needs back-up sources of energy because renewable supply sources like wind and solar can be intermittent.

The dramatic shift from fossil fuel plants to a lower carbon generation model is creating huge opportunities for the supply of continuous uninterrupted supply of base load electricity which both MAST and Corcel are addressing. Given the arrival of a comparable stock on the market with MAST’s IPO, it is well worth looking at how Corcel compares and revisiting our target price for this stock.

Corcel is investing in energy storage/renewable projects to provide critical services to the UK grid as it transitions from coal/nuclear generated power to renewables. The initial 100MW energy storage at Burwell, Cambridge is strongly backed by a major pipeline of projects that are under review.

Corcel has a strategic partnership with ion Ventures Ltd which is an investor in and also a developer of energy storage and flexibility assets. Ion’s business model involves originating and developing energy storage projects. Following the financial close for individual projects, ion generates earnings through yield from its carried interest and management fees earned by having a continuing role as project manager and operator of assets. The ideal project is one with a good quick grid connection and a decent lease on the site. 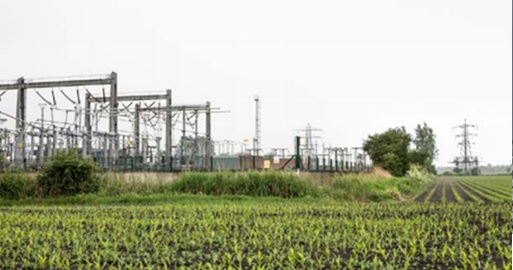 On the flexible grid solutions side, Corcel’s flagship project is the 100%-owned Burwell Project which is a 100MW (50MW of energy storage and 50MW of solar) project  located outside of the town of Burwell in Cambridgeshire. Already, the land lease heads of terms are in place and the grid connection is secured. The project owns the last 100MW 132KkV connection available at the substation there and there are multiple expansion options including solar and storage. Planning could be gained here shortly making the project shovel ready, which is a pretty big inflexion point as at that stage the project could then be sold, funded or new partners could be brought in.

Corcel is the old Regency Mines which is best known for its vast Papua New Guinea nickel laterite project Mambare, which on its own was once valued at £40 million. It has all been a bit quiet there over recent years as the company has gone through substantially restructuring. We believe that the decks have now been cleared ready for a period of substantial growth. With James Parson now at the helm, investors can look forward to creation of a highly relevant vehicle. With the latest funding, it does look as though the real magic is really about to start now.

The company is being positioned to really benefit from expected price hikes in battery metals. It has got to be said that the transition to a low carbon world has begun in earnest. Storage is needed for renewable energy to be a viable and stable source of energy, and hence the growing clamour for batteries and battery metals where a supply crunch is expected in the mid-2020s onwards with potentially big price hikes.

All the signs are that Mambare could be poised to become a direct shipping ore (DSO) nickel supplier to the large Chinese market for stainless steel production. The Mining Lease could be awarded within the next 6 months, allowing a DSO operation funded by a joint venture partner. Banged together with Wowo Gap, another big PNG nickel project that looks likely to come to Corcel, could spell some right old M&A action. 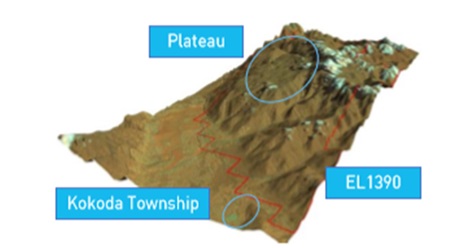 The Wowo Gap Nickel Cobalt Project is located 250km from Mambare in PNG but is actually 100%-owned by Resource Mining Corporation (RMI). However, Corcel owns a A$4.76 million senior debt position in RMI which is repayable within the next 12 months and moves look to be on the cards by which Corcel would gain Wowo Gap. These days when nickel is so in demand, that would make for big news. In one fell swoop, Corcel would double its nickel resources, which we believe could spark a material stock increase.

In reality, Corcel does not really control the pace of play at Wowo Gap. However, in February 2021 we did learn that RMI had acquired a controlling interest in a nickel project in the Kabulwanyele Nickel Project (KNP) in Tanzania. Such a move looks as though the RMI board has found another asset to put into the business which suggests that all the pieces are being put in place to trigger the end game.

There is a lot going on at Corcel. It is abundantly clear that the company has a cracking pipeline of newsflow planned which could keep the share price nicely on the boil over the balance of this year, with lots of inflexion points which could give the market a chance to continually upwardly reassess Corcel’s value. 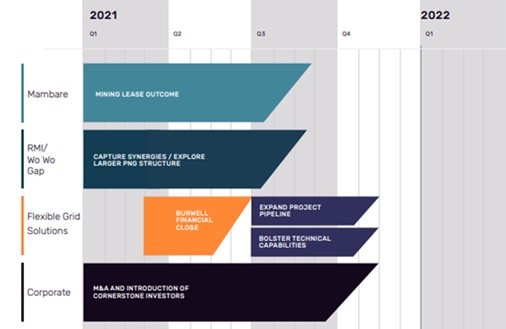 The MAST IPO provides a good opportunity to revisit our valuation and target price for Corcel. The pre-new money valuation that MAST is getting on listing is £18 million. This is interesting as Corcel’s 100%-owned Burwell Project which is a 100MW (50MW of energy storage and 50MW of solar) project, neatly trumps MAST’s portfolio. At IPO, MAST appears to have between just 9MW and 20MW of projects in its portfolio which are really advanced.

Valuations per MW for MAST range from £3.6 million to £0.9 million. Even taking the lowest figure and discounting it by 50%, to remain ultra conservative in our comparative analysis suggests a valuation of £45 million for the 100MW Burwell project. It has got to be remembered that Corcel is not just going to do Burwell, its FSG division is busy looking at other projects. Certainly, this is a very attractive space to be in as it is critical to the UK’s transition to renewables and a lot of money is chasing such deals.

We have in our SOTP valuation below once again used highly risked peer comparisons to determine valuations for the company’s other interests. All this has been fed into our table where we have been generous in assuming the comparative with MAST is based on their 20MW capacity.

Our SOTP valuation totalled £52.41 million. Based on the number of shares currently in issue (321,381,614) the per share valuation would come out at 16.31p. On a fully diluted basis, we have adjusted the number of shares by ignoring the warrants that are well under water as they are exercisable at 25p and 60p. This leaves a total of 423,344,819. Adding the funds that would result from the options being exercised of £2.24 million gives a total of £54.65 million, which equates to 12.91p. We have chosen to use this as our new target price – more than four times our previous target price of 3.19p.

We are more than happy to reconfirm our Conviction Buy stance for Corcel, with a new target price of 12.91p.

Corcel is a research client of Align Research. Align Research holds an interest in the shares of CRCL. Full details of our Company & Personal Account Dealing Policy can be found on our website http://www.alignresearch.co.uk/legal/