Yesterday’s full year results from Barclays brought to a close what was yet another disappointing reporting season for the five FTSE 100 banks. Seven years on from the Great Financial Crisis of 2008/9 and the UK listed blue-chip bankers are still being plagued by heavy losses, driven by continuing provisions for product mis-selling, regulatory fines and restructuring fees running into the hundreds of millions.

While HSBC and Lloyds looks to be getting their acts together, Standard Chartered continues to struggle and RBS remains a basket case. Barclays on the other hand is a much more complicated story. Yesterday’s results were a mixed bag but the market’s reaction to them was wholly negative. At one point in the day the shares were so volatile that trading was suspended for 10 minutes. Down by 11% at one point they finally ended the day down by 8%.

Despite yesterday’s falls we believe that the market has over-reacted to the results and that a sharp bounce back may be on the cards.

Why did Barclays shares fall?

– underlying pre-tax profits for 2015 fell by 2% to £5.4 billion after the firm posted a fourth quarter loss of £1.9 billion. This was below analyst expectations following an addition provision of £1.45 billion being made for PPI mis-selling and a 20% quarter-on-quarter fall in revenues in the investment banking business.

– the company confirmed media reports that it would be moving out of Africa, expecting to sell down its 62.3% stake in African banking business BAGL over the next two to three years. The business contributed profits of £0.98 billion in 2015 and was seen as a key growth area by previous CEOs.

– the dividend, steady at 6.5p for the past four years, has been cut for the first time since the financial crisis in 2009. The payment will be slashed by more than half, to 3p for the next two years, in order to improve capital ratios. At the current share price this leaves a relatively uninspiring yield of 1.9%.

As the results demonstrated, there is a lot to dislike about Barclays at the moment

Having gone through CEOs in the past few years like a relegation threatened football team goes through managers the business is still in need of significant elbow deep cleansing. And the new chap in charge, Jes Staley, has yet to impress. In particular, the Africa exit seems a poor move given the huge opportunities to grow in the continent’s developing financial markets. Just look at the figures – the business made a return on tangible equity of 11.7% in 2015, almost double the 6% return made in the Investment Bank business.

And the decision by Staley to say he wants to sell the African business before he has done so reminds us somewhat of Gordon Brown telling the world that he was going to sell off the UK’s gold reserves before he offloaded them at the bottom of the market. What’s more, the decision to cut the dividend by 54%, while only cutting the bonus pool by 10%, is a veritable two fingered salute to beleaguered shareholders – especially given that the statutory net loss for the year was £394 million.

But on the upside, Barclays is still profitable on an underlying basis, with all of the core businesses making an underlying profit in 2015, group losses being posted due to large litigation and conduct costs. While there is still work to be done on the strategic direction you have to hope that some good work has been done in improving culture over the years so that in the medium/long-term consistently regulatory fines and one off charges will be a thing of the past. In addition, with the Financial Conduct Authority proposing to set a deadline of 2018 for PPI complaints a line under this matter should be drawn shortly.

The main attraction here is the compelling valuation

What is striking is that the market caps of Barclays and RBS are currently almost equivalent despite Barclays being in much better shape than its long-suffering rival.

RBS has now reported eight straight years of losses, losing a net £2 billion in 2015 compared to Barclays having been relatively resilient on an underlying basis. Despite this fact Barclays trades at a higher discount to NAV than RBS and, despite yesterday’s cut, still pays a dividend. While the Barclays dividend cut is fresh in the minds of investors there is still a token yield, and in comparison RBS recently announced that it expects any capital distribution to resume later than Q1 2017.

In our opinion, on valuation grounds, there looks to be decent potential for Barclays to bounce back in the short-term. 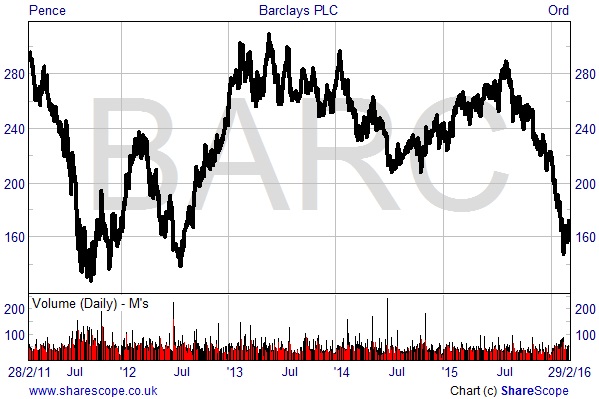