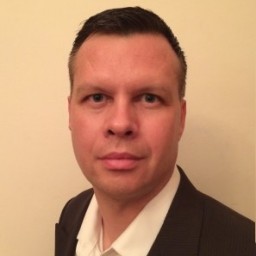 Our last update on the outlook for global commodities, published in January, was very different from the wider market consensus at the time. We also highlighted 3 natural resource companies set to benefit from what we believed would be realisation in the market that our macro view was a viable prospect. As is often the case, events have moved forward at a greater pace than widely expected. The share prices of our three covered stocks moved sharply higher in the weeks after our previous note.

The main reason for our optimism in the natural resource space was purely based on the fact that its fundamentals were nowhere near as bad as the markets suggested.

We highlighted that the outlook for some commodities were better than others, and that precious metal companies were likely to be the first to benefit from a change in sentiment. This was why 2 of our 3 conviction buys were from this sector. The gold price subsequently rebounded sharply from below $1,100/oz to over $1,250/oz, with both Randgold (RRS.L) and Fresnillo (FRES.L) rising by over 50% within 6 weeks of our last note and holding these gains since.

At the start of the year the Fed had just put through its first rate rise and investors discounted a number of further rises throughout 2016. Markets are now forecasting just 2 rate rises this year (down from 3-4), indicating a significant shift in mind-set and closer to our view at the time. Naturally, the US dollar has slightly weakened on the back of this and helped commodity prices recover, but the increased enthusiasm for gold and precious metals has been primarily due to our core argument that the economic growth cycle was stretched. Another imminent global downturn, with rates still just above zero, suggests the return of quantitative easing on a much larger scale than previously experienced, and is the recipe for much higher gold prices.

While the shift in US monetary policy outlook has not surprised us it is important to note that we are still likely to see volatility in the precious metals sector throughout 2016. However, we expect gold and commodities to be higher at the year-end. It is hard to make the case for a much weaker US dollar if monetary policy in the rest of the world is so loose and is set to remain so. This issue was also highlighted previously and remains important. The recent decision by the ECB to expand and increase its current quantitative easing programme speaks for itself. Despite the reduced estimates for rate hikes, the Fed is still on a tightening bias. Opinion within the Fed and in the markets is split as to whether monetary policy should already be tighter, especially given recent inflation figures.

Despite the reduced estimates for rate hikes, the Fed is still on a tightening bias.

Opinion within the Fed and in the markets is split as to whether monetary policy should already be tighter, especially given recent inflation figures. But it is our view that the Fed still wants to tighten simply because it wants to start cutting from a higher level when the next downturn takes hold. Historically, it takes at least 300 basis points of cuts to effectively fight a downturn, and to commence from at or near current levels suggests using quantitative easing to such an extent that it is very unclear as to whether the benefits will outweigh the costs. Unless US growth is much weaker than expected throughout this year, the US dollar should remain relatively steady. 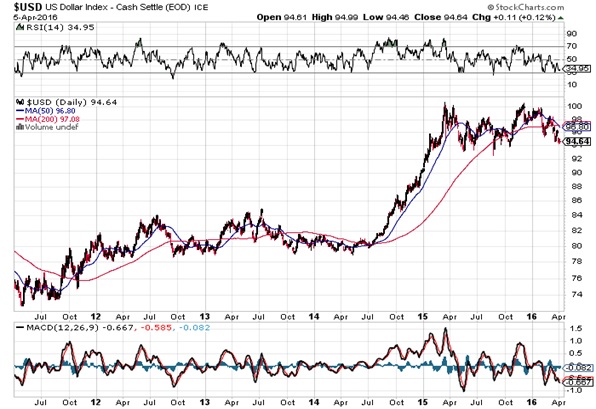 It is our view that we will see continue to see variability in US economic data, enough to keep the dollar range bound and rates low. However, looking ahead to 2017 investors will still buy gold because of the worrying global backdrop. With global debt levels 36% higher now than after the global financial crisis, the concept of “helicopter money” is now being openly discussed in the markets – a phrase until only recently confined to the small world of raging gold bugs. Suddenly the unthinkable is being thought about. We don’t think that Randgold and Fresnillo will get close to returning to the lows of mid-January, but believe there will be a number of opportunities to add to long-term positions during the next 6 months.

Our third covered stock Antofagasta (ANTO.L), also surged by more than 50% since January before giving up more than half those gains. Again, this is consistent with our view that mining companies will experience high volatility this year given the uncertain global outlook. However, we still see evidence of improving fundamentals for copper and therefore good opportunities for Antofagasta. 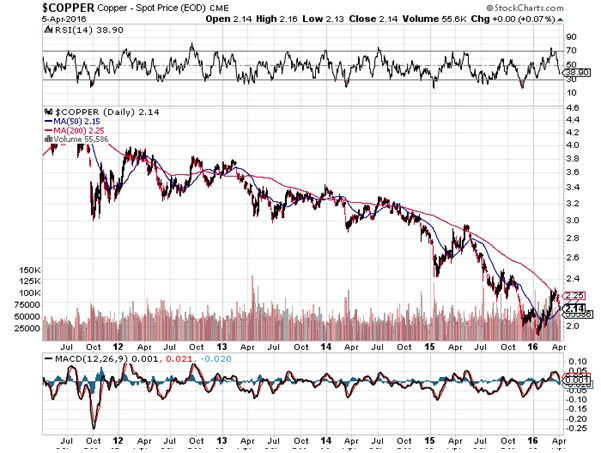