Given the recent weakness in the stock price as investors digest recent warrant sales and the exit of 20m shares by Tectonic Gold, investors could be forgiven for having completely overlooked the tremendous lithium potential – the “hot” rare earths story of recent months.

Lithium is well on the road to becoming critically important in providing power for the greener world over the coming years. Although the metal is used as lubricants, drugs and in the manufacture of glass, lithium’s use in batteries is attracting all the attention. The rare earth occurs as a variety of minerals in both hard rock and brines. In a hard rock setting, lithium minerals occuring in granite pegmatities are spodumene, apatite, lepidolite, tourmaline and amblygonite. The most commonly occurring mineral is spodumene which is the principal source of lithium metal in the world.  Pegmatite hard rock processing requires crushing the ore, concentration by froth flotation followed by hydrometallurgy and precipitation from an aqueous solution. Depending on the application, lithium hydroxide or lithium carbonate will be created. The last decade or so has seen the production of lithium from brines. 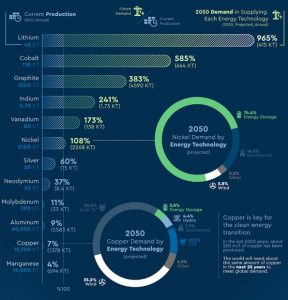 Governments around the world are seeking to significantly reduce greenhouse gases, with policies that encourage electric vehicles a real shortcut to hitting self-imposed emission targets. Batteries do look like the obvious way ahead and one thing is for sure, given this growth scenario, demand for lithium is not going to be linear.

Unlike industrial commodities such as copper, the lithium market is not that well developed and there is a lot in play with the lithium-battery value chain well on its way to be worth trillions. The World Bank predicts that 965% more lithium will be required to be produced by 2050 to meet forecast demand. There is no doubt that sustainable and reliable lithium production is going to have to keep up.

EVs and power grids are just not possible without battery technologies which require a vast amount of minerals. The lithium-ion cell has three components (anode, electrolyte and cathode) which need key minerals like lithium, nickel and cobalt.  As we can see, the future demand for lithium compared to current production is demonstrably higher than for either cobalt or nickel.

Behind the growth in lithium-ion batteries is energy storage and the EV markets, which are on the up as the world begins to turn its back on power generated by fossil fuels. Such is the level of demand for EVs and energy storage, there has been a global battery arms race which has seen unprecedented growth in the building of battery mega factories at many sites around the world.

The likes of Roskill and Morgan Stanley are suggesting that current lithium demand my need to increase some six times by 2027. Apparently, there are now 200 megafactories in the pipeline to 2030 with some 60% of these already operational. Lithium is used in advanced clean technologies which includes mobile consumer products, fuel cells, EV, robotics and renewable energy storage. 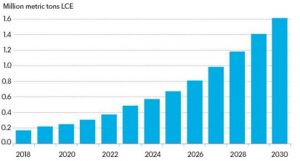 Due to lithium’s key importance in energy storage, the metal has been identified as a critical material by the US Department of Energy (DOE). High lithium prices are not a problem as they make up only a small amount of the cost of batteries. The real problem is the West’s continued reliance on Chinese sources.

Industry trends are incredibly persuasive. Firstly, with a 300% forecast increase in demand for EVs and mobile power storage, it looks as though it will be tough to meet supply chain demand. Secondly, falling battery prices (down 80% since 2013) due to technological improvements are making EV’s increasingly more affordable. Thirdly, President Biden’s multi-trillion economic recovery plan brings a renewed focus on green infrastructure. On top of that, last year Bloomberg Energy was suggesting that by 2024 the lithium-ion battery sector would be worth around US$90 billion. 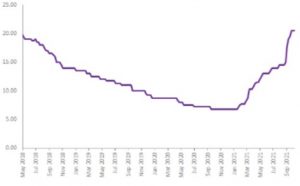 Lithium is now being seen as being one of the most sought after commodities in the market – in fact there is a lithium rush going on at present. World lithium production is concentrated in the hands of Australia (49%), Chile (22%), China (17%) and Argentina (7.6%), with the Big 3 accounting for 88% of global lithium production.

It gets worse than that though – as once the metal has been mined, the majority of all the refining, processing and packaging into battery cells for EVs happens in China. Out of those 200 battery megafactories in the 2030 pipeline – apparently some 148 are in China. The message coming out of this loud and clear is that China well and truly dominates lithium.

Just looking at the US, the DOE released a national blueprint in June 2021 which showed how the country would boost its ability to make lithium batteries. The US is a small player in this market and on its current trajectory, the country would not even be able to supply less than a half of the projected demand for lithium-ion batteries for EVs on American roads by 2028. Given all the above, you can see why the US and other western countries which are highly dependent on lithium imports are in one mighty scramble to secure their lithium supply chains.

Kazera’s tantalum project has demonstrated small scale production of tantalite concentrate for the global tantalum market where its partners/buyers are large global companies involved in manufacturing. These buyers need tantalum with good provenance, which company’s production from Namibia will provide. Plus, there is the potential for lithium which Kazera almost gets for nothing as the tantalite mineralisation contains lithium as well as the lithium ore containing tantalite.

At the same time, impressive lithium grades at Purple Haze also come with good levels of tantalum. Demand for lithium is rising dramatically for use as a battery metal, with the World Bank forecasting  that demand for lithium, cobalt and graphite could climb by 400-500% by 2050 in a scenario where global warming is limited to a 2°C rise.

Last month, Kazera was able to announce the successful negotiation of an off-take agreement for the sale of all its tantalum production to a Chinese player. This deal is with Jiujiang Jinxin Nonferrous Metals Co Ltd and is for an initial three-year period to the end of 2024. Jinxin will be purchasing all the tantalum concentrate produced by Kazera at a fixed price that is competitive in terms of those paid globally by end-users of tantalum. Importantly, at that time, Jinxin had also expressed an interest in developing Kazera’s lithium deposit.

Reading between the lines, Jinxin seem to have made it fairly clear about its ambitions for Kazera’s lithium. Given the sort of progress that we are seeing at KZG’s operation in Namibia, we can’t help thinking that any sniff of an offtake agreement concerning the lithium might be quite explosive for the stock price given that at the current market cap of @ £8m we believe there is absolutely no element of this potential in the price. It seems the delayed Namibian investment at 2.7p continues to act as a drag and is becoming something of a poisoned chalice. Our own discussions with management have made it clear that given the material newsflow this last several weeks that they believe that the development of Tantalite Valley Mine can be funded from internally generated sources. As largest shareholders we welcome this and can also confirm that some of the speculation of a placing in certain quarters is completely wide of the mark. We point investors to comments from management in the last few RNS’.

We initiated coverage on Kazera with a Conviction Buy stance in early August 2020 at 0.70p with a target price of 2.50p. All things seem to be going in the right direction, with the swiftly changing fortunes at the company’s diamonds, the expected imminent HMS licence award and the deal done with DJ Drilling in Namibia to restart Tant mining with costs paid out of production. This all comes alongside the increasing importance that the exposure to lithium brings in a world which looks destined to experience a chronic shortage.

We believe that Kazera is becoming really special but has a derisory market cap at present due to the delayed investment, negative UK small cap sentiment and warrant digestion. We are in the midst of a big update report on the company and are revisiting our target price for the stock, which had been highly risked. At the current price of 1.1p, we are more than happy to confirm our Conviction Buy stance and believe this presents a very unique and compelling opportunity in the UK small cap mining space.