Regular followers of us at Align will know that our primary investment method is to alight upon deep value situations where we perceive asymmetric risk/reward structures. Some go very well such as ITM Power, Genel Energy, Silence Therapeutics, Gulfsands Petroleum, Anglo American etc and others not so well, principally Providence Resources (one day the institutions will kick out Tony O’Reilly Jnr who has failed shareholders on a monumental level and finally reset the company’s prospects!).

We have in recent months alerted our followers to a number of new opportunities – the US generic pharma plays, Greenfields Petroleum and also Mayan Petroleum – all of which have been covered in-depth on this site laying out our analysis and why we see multiples of upside in each of these picks.

One stock however that has really piqued our interest in recent weeks is Pathfinder Minerals – the natural resources company whose primary assets are contested licences in Mozambique covering an area of some 32,000 hectares and which holds world class mineral resources of rutile, zircon and ilmenite. The background to the company can be found HERE and below is a map of their licence area in Mozambique. 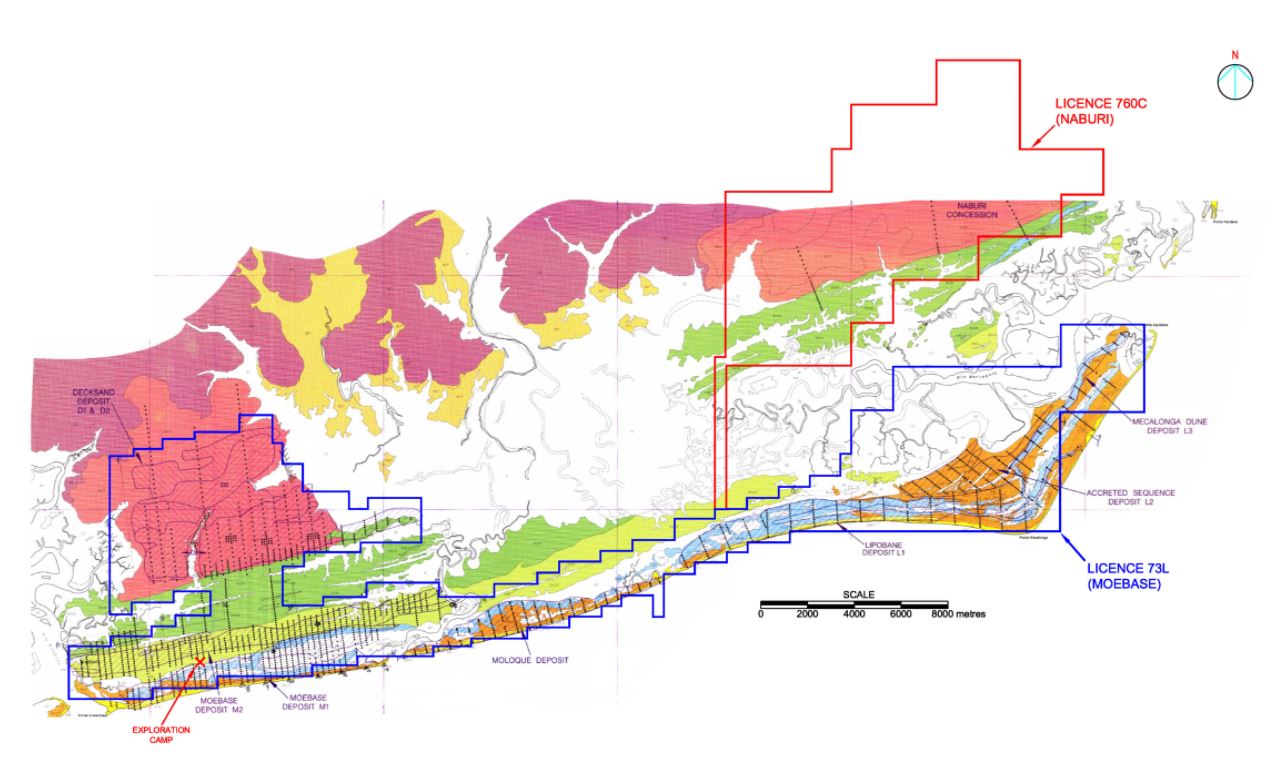 The potted background as to why the stock price collapsed from almost a pound to under 1 penny is that Pathfinder’s Naburi and Mobae licences were de-facto “stolen” from the company in late 2011 when they were transferred to a company controlled by a former director – General Jacinto Veloso. The asset had an independently valued NPV at the time of loss of the licences of just over half a billion dollars (NPV10). It is worth pointing out that this NPV figure was based upon an ilmenite price of $125/tne, zircon of $1148/tne & rutile $677/tne. This compares with current prices of $160/tne, $1230/tne & rutile around $800/tne. Of course there will be variation in these prices but it does illustrate that in fact the economics of PFP’s licences have actually strengthened over the last 6 years.

“We are, however, striving to enhance the prospect of an alternative resolution that does not rely on the courts. It is on this strategy that Pathfinder’s management has spent most of its time during the period under review and on which encouraging progress is being made.

As announced on 20 September 2017, our regional representative in Mozambique is leading discussions on the Company’s behalf with the two principal parties to a would-be resolution: the Mozambique Government and Jacinto Veloso. While the content of such discussions is sensitive, Pathfinder has confirmed that the Board is currently preparing, with the Company’s legal counsel, the framework of an agreement with Jacinto Veloso that would, if successful, result in the restoration of the licensed areas to Pathfinder’s control.”

The above statement was dated 20 September 2017 and so over 2 months have now passed. I recently met with CEO Nick Trew and came away with the distinct impression that he is completely focussed upon bringing this long running litigation to a positive conclusion for shareholders. I also got the impression that he would like to minimise dilution from this point on too.

So, with the above in mind, investors are presented with a current opportunity where there is an asset with an NPV of probably close to $1bn now based upon the increased commodity prices for ilmenite, zircon & rutile, where the clock is ticking on news re the outcome of the potential resolution with Veloso and yet the market cap remains at a level where clearly no value is still being ascribed to the licences by the market.

To give you an idea of the world class basis of Naburi & Mobae and the potential scale of the operations, take a look at the 2 tables below: 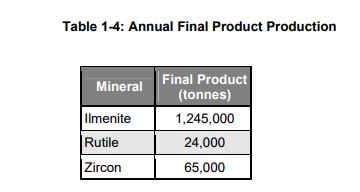 Our position is that, let’s face it, if our Conviction Sell call Bluejay Mining can obtain a market cap of near, incredibly, £200m without either EIA or SIA approval let alone the all important exploitation licence and, PFP’s near neighbour in Mozambique – Kenmare Resources currently enjoys a market cap approaching half a billion dollars, no matter which way I look at it Pathfinder’s present market cap of just over £2m reflects, to my mind, almost nil optionality for a successful resolution of the disputed licences. This, bluntly, is the opportunity we see in the stock now.

If we look to be conservative and take a “halfway house” scenario in a potential framework deal whereby there is an effective split of the asset such that PFP receives back an economic interest of 50% in the licences and we assume that the NPV of is still circa $500m by using a higher discount than in the pre feasibility study (to offset the higher commodity prices we see today), this would give PFP an interest in an asset with present value cash-flows (before further exploration in the field) of approx $250m

Let’s go one stage further in risk discounting and assume that as part of a potential resolution/compromise agreement PFP are to fund the full infrastructure build out. We still arrive at an NPV of over $200m (below is the estimate from the PFS revealing that the infrastructure cost was approx $42m):

Recall also that before the loss of the licences (and with lower resource prices at the time), the market valued Pathfinder at its peak at @ £85m. Again, halving this we still end up with a post resolution potential market cap of approx £40m – nearly 20 times the current market cap. Do we believe it would move to this level overnight? Of course not as there will still be a “legacy haircut” applied to the shares and management will need to present a bona fide plan to raise the infrastructure and development funds.

What, to my mind, is more likely to happen is that the stock price will quickly reflect the early stage basis of the exploitation of PFP’s world class resource and that a market cap of say £8-10m would likely result overnight. This would place a stock price of @ 5p on the shares at that point. As management supplies detail on the company’s plans for development of the mines, a reassessment by investors of the investment case would then take place.

We are realistic however and realise that the company, at present, is operating largely for legal/litigation funding purposes and that most likely a minimum of £2-3m would look to be raised quickly once/if a resolution is found. That being said, we believe that management would have a rather different investor reception in the City in this situation than at present and would not expect such a modest raise likely to be a problem, certainly if a sub £10m market cap is still being applied to the stock. We suspect there would in fact be a clamour to fund the company at that point.

Of course, should the licences be restored and the stock price still not continue to reflect any realistic optionality re development of the asset then, to my mind, there is a very real possibility of Kenmare Resources looking to absorb PFP given their proximity in Mozambique to PFP’s fields.

We also believe that the Mozambique Government does wish to have an amicable resolution and to actually look to ultimately generate some much needed revenue and local employment from PFP’s misappropriated licences. As each day now passes the odds on news on the acceptance (or otherwise) of the framework deal being announced narrow. This  is also patently something that has not escaped other investor’s notice with  the volume in the stock rising sharply over the last several weeks as the chart below shows (volume circled) indicating new buyers are positioning for such an event. 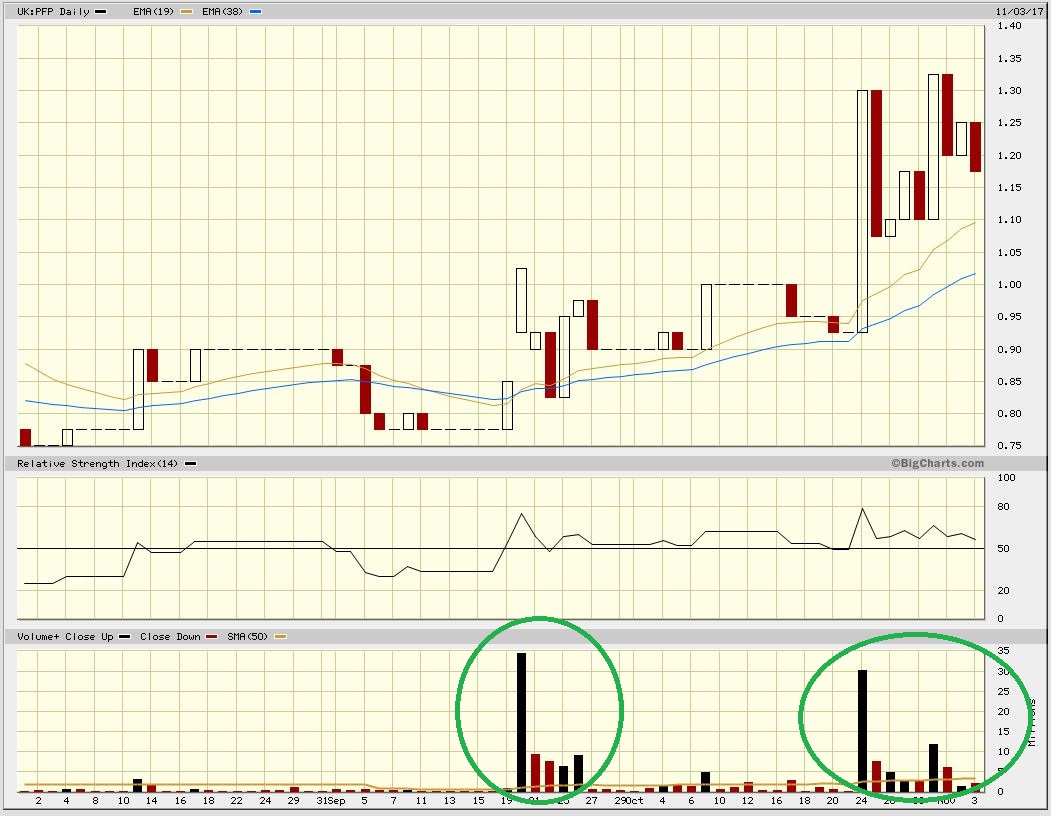 To conclude, at a stock price of 1.15p, for those with a high risk appetite and where any such position forms a small part of one’s portfolio, buying Pathfinder ahead of the hoped for return of the licences presents a very rare asymmetric risk/reward profile with the potential to generate multiples of the current stock price in returns. We are buyers here and attach a Speculative Buy stance to the stock.