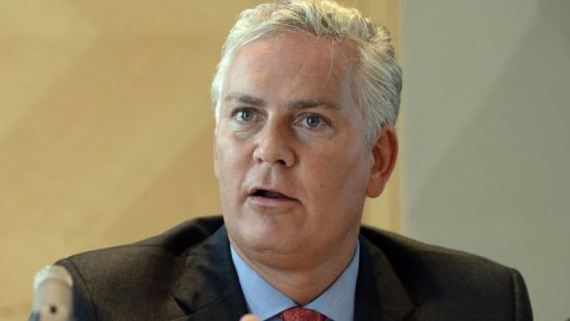 We have written previously about PVR, as a quick scroll lower on this blog will reveal. As disclosed at the foot of this piece I am also a relatively significant private shareholder. This comment is to bring to the wider markets awareness what I believe is the seemingly perpetual hindrance to the stock price relative to its assets.

A quick background on the valuation opportunity.

As we can see in the image below PVR holds a number of licences in the waters around the island of Ireland – of varying drilling depths. 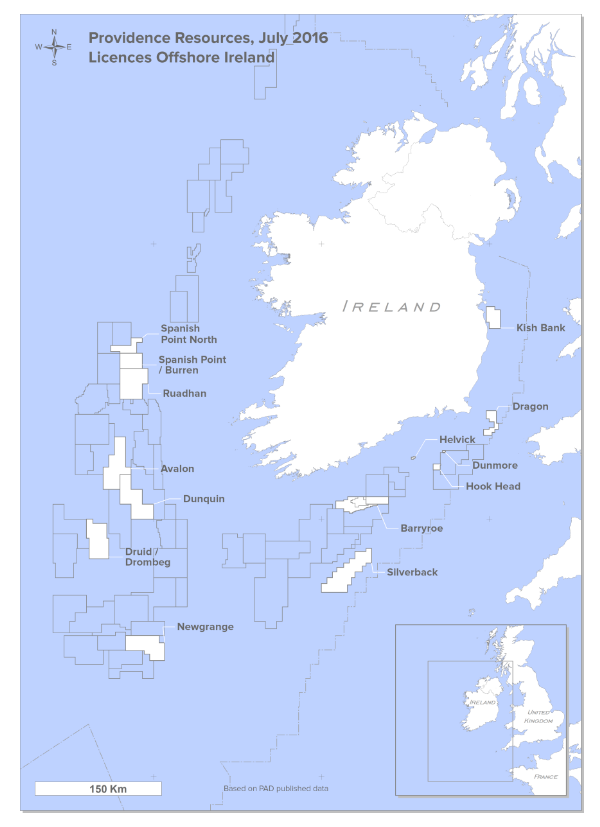 The so called “company maker” in recent years has been the Barryroe field positioned off the South coast of Ireland. Due to its coastal proximity and relative progression of appraisal given previous drilling campaigns by majors it is deemed the closest to FID status in the PVR portfolio. Long story short but, it is actually conceded here; largely through bad luck the Company has been unable to conclude a farm-in on this field. It has not been through a lack of interest however with Maurel et Prom and private equity crew Sequa Petroleum being the most recent publicly disclosed interest parties. The former in fact a potential bidder for the Company in late 2014 at an Enterprise Value a multiple of the current one.

Due to the inability to conclude the key Barryroe farm in and also as a consequence of Tony O’Reilly Senior’s financial woes that created a number of creditor sellers of the stock during 2014 and 2105 (TOR Senior had been fighting his creditors for a number of years over debts running to hundreds of millions of dollars), the stock price has fallen from over 700p to 11p during the last 4 years – far in excess of many other companies in the embattled sector. I will repeat that shocking capital destruction statement – the stock has fallen from over 700p to just 11p – a near 99% decimation of value for those investors unlucky enough to have held on. But, that is not the worst for these poor saps.  During that period there has been two placings and nominal open offer elements that has increased the share count from just under 65m shares to just under 600m. Those unable to commit have been veritably diluted out of sight.

If the above was not enough, there was also the controversy surrounding the court case with Transocean and the drill rig claim where, on legal advice that I have retained, it seems the Company did breach disclosure rules regarding the conclusion of this. In the 2014 YE accounts the Board signed off on a statement regarding a “final” payment to Transocean as below:

Problem was that as shareholders found out to their horror in April this year, it was not the final payment. In excess of $7m was ordered to be paid to Transocean by PVR and its partner LOGP having lost the appeal that was brought by Transocean. The loss of this case brought the Company’s then precarious financial situation due to the Melody loan that was due for repayment this year to its knees and necessitated the suspension of the stock pending clarification of the Company’s financial situation.

I was personally so shocked at this disclosure and the market’s non awareness of it that I went to meet with James MCarthy in Dublin and made clear that my previous support for TOR Jnr (and sympathy I would add up to this point) was no more. At this meeting a more worrying issue came to light and that was just how little a grasp that Mr McCarthy appeared to have on the Company’s current financial position and a couple of other moving issues within Providence. It was clear to me that it really was the TOR Jnr show and that McCarthy continued to blindly trust in his stewardship. In fact, the comment was made by McCarthy that TOR Jnr was the man with the connections to bring PVR’s asset realisation to fruition and the Company did not have another individual in situ to take over from this.

Further digging on my part revealed that there are in fact close ties between James McCarthy’s father and Tony O’Reilly Senior and that my requests, for the wider shareholder base’s good,  that TOR Jnr be removed from the Company were clearly falling on deaf ears. Indeed, as the subsequent weeks passed Mr McCarthy’s initial willingness to hear my valid points diminished to the point where communication simply ceased. Corporate nepotism is all well and good in family controlled businesses but as I will illustrate shortly, when you hold next to no stake in the Company and the other Board members, in particular Lex Gamble, also have ties to TOR Senior then the latitude for nepotism I would argue is much diminished.

It was at the 2015 AGM in Dublin that I posed the question in that public forum to TOR Jnr following his presentation highlighting just how undervalued PVR shares were on a 2P basis relative to other industry peers that would he be purchasing stock at the earliest opportunity? TOR Jnr was eager to relay that he would and that he personally was very frustrated at, as a consequence of the continued farm-in process , that the Company’s Nomad believed him to be restricted (that is unable to buy stock). I relay below the disclosure table of the current Board’s holding in the Company. 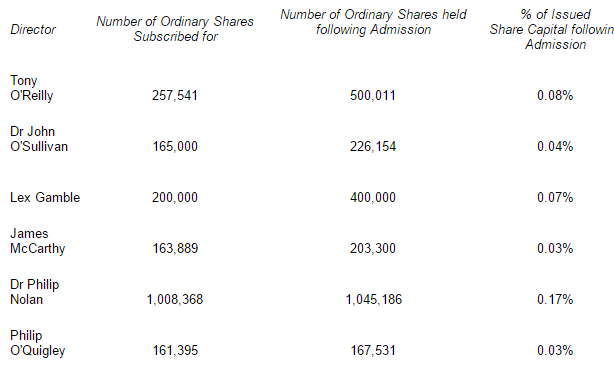 Given that TOR Jnr has taken reasonable millions of euro’s gross out of the Company during the last 4 years alone and that he convinced his institutional shareholders to stump up over $70m again to spin the wheel once more, to purchase less than £30,000 of stock is, in my book, yet another finger in the eye of long suffering shareholders. On McCarthy’s part to buy less than £4,000 of stock, then quite simply without defaming him it is difficult to find the words to express my contempt. If they believed the stock to be woefully undervalued in June of 2015, then at the offer price of 12p in the recent raise, and adjusting for the net cash the company now has, the shares were available for purchase by management at a small window of opportunity from a regulatory perspective at an even cheaper level. As the open offer was poorly subscribed I do not believe there is any argument that they were unable to only purchase their open offer entitlement too.

Collectively the Board hold less the 0.5% of the Company. Think on that… TOR Jnr, absent a derivative action that does remain live, seemingly has an unassailable hold on the corporate coffers and Company direction through a submissive and inter-related Board structure. There must surely be something wrong with this. If any of the institutions had teeth and really did understand the reality of fiduciary duty to their unit/pension holders, they should have insisted on a minimum of £200,000 investment by each of McCarthy and TOR Jnr in the recent capital raising round and £50,000 on the part of the NED’s. Ditto, if there is no farm in progress on Barryroe before the autumn is out TOR Jnr should be removed together with McCarthy.

I have seen many things in the markets over my near 20 years’ involvement but an almost 99% wipe out of long term shareholders with a derisory  0.5% management stake coupled with the debacle over the Transocean court disclosures with the Company then teetering on bankruptcy is a new one on me. It truly is worthy of a business school case study.

To conclude, the recent capital raising is a positive thing for the Company, being surrounded in the Atlantic basin now by majors following the recent Atlantic licensing round and having the money to drill the Druid field are all conducive to the investment case and where, for the avoidance of doubt, I still believe the shares are undervalued by a factor, depending on drill success and farm in progress, of 5 -10 fold. The issue for ALL PVR shareholders is simply that I believe TOR Jnr is in fact now a drag on the ability to conclude, with industry partners, a successful outcome on the farm-ins. That he is a salesman of epic ability and can raise money is clearly not in doubt but his capability as a monetiser of assets and a Company maker is, as the historic record shows, sadly not anywhere near up to the same standard.

Tony O’Reilly Junior – as you deigned to reply to my questions regarding the insulting levels of capital you and your fellow Chairman Mr McCarthy put into the recent placing whilst raising some $70m, I repose in a public forum given the serious issues raised here – just why did you commit such a derisory amount? On Mr McCarthy’s part – if you have any real concern for the long suffering shareholders of this Company then you should resign yourself and install a new and entirely independent Chairman un-conflicted by historic family connections as well as replacing the NEDs.

To be clear, Providence Resources does, I believe, hold a valuable O&G resource base, indeed many other industry observers and specialist analyst reiterate this stance. However, the current management has, quite simply, been able to monetise these assets for shareholders and is now, in my opinion, tarnished with this legacy. It is time for the Company to have a completely fresh impetus with a new management team that are truly aligned and capable of progressing these assets. Absent this, the company is likely set up for more failure or even a cheap takeover thus depriving shareholders of the upside that has been tantalised for many years now.

CLEAR DISCLOSURE – The author, who is a Director of Align Research Ltd, holds a personal position in the equity of Providence Resources and is bound to Align Research’s company dealing policy ensuring open and adequate disclosure. Full details can be found on our website here (“Legals”).