The last time we were bullish of the pound was in spring 2016 and although we caught a sharp upward move against the Aussie dollar in the days after the piece, the Brexit vote turned everything on its head.

Fast forward to the dawn of 2017 and we again believe that it is time to take a bull position in sterling against selected currency pairs, in particular the Canadian Dollar and South African Rand.

The strength of the 2 pairs against the beleaguered pound has been even more exacerbated due to resurgent commodity prices (they being deemed “commodity currencies”) and, in the rand’s case, the material interest rate differential of near 7%. Together with the political risk premia that has increased materially post the EU referendum vote, the pound has thus been particularly weak against both these pairs. Indeed, as we can see in the weekly chart below v the rand, sterling has depreciated by a whopping 35% against this currency in just over a year from the peaks seen of approaching 26 the pound at the beginning of 2016. I believe this is the largest pound depreciation on record v the South African rand in such a short timescale. 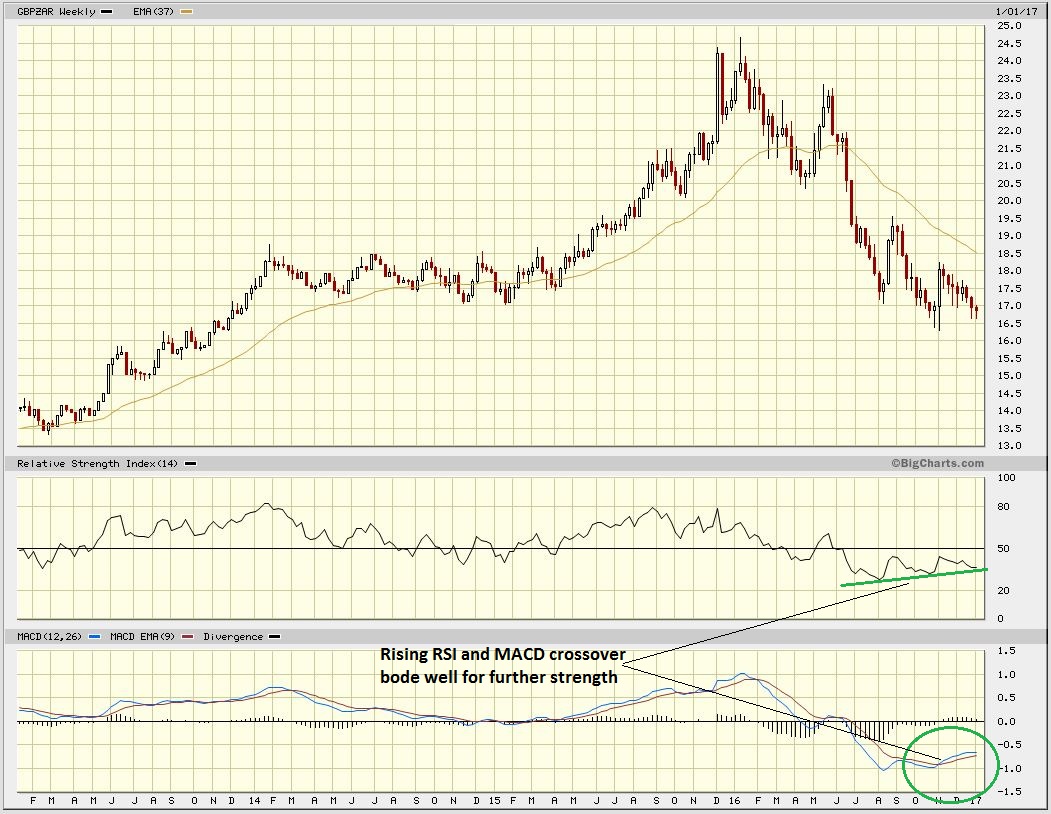 It is clear however from the chart that the RSI has begun to rise from very oversold levels and there has also been an MACD cross over in recent weeks. With the pair not breaching a new low too since probing 16 in October, this early divergence looks to us as a harbinger of future strength.

Interestingly, the news flow since the EU referendum has been resoundingly bullish for the pound – completely at odds with the price action. We believe that it is simply the weight of speculative money that has weighed on the currency together with trader sentiment. However, in currency markets in particular, price action always ultimately follows the economic fundamentals and rising inflation, resilient growth, resurgent exports, a tight labour market and a material shrinking of the current account deficit are all arrows pointing up for the pound not down.

As the US interest rate cycle turned in December last year and the market anticipates up to 3 further rises this year, we would argue that the case for interest rate rises in the UK is actually stronger than the US. Our inflation is higher for a start and is expected to trend further north this year. It is only the sheer ineptitude of Mark “Carnage” (and whom should be removed from office in our opinion) that is keeping the coiled spring of rate rises  in the UK down at the moment. Sadly for much of the populace that hold mortgages and debt, when his folly is finally reined in by the markets (as is evident already with rising gilt yields) then this spring is wont to rise further than it should or could have been had he acted in accordance with the current economic set and the pain will be much worse than it could have been.

Put simply we believe that the correct rate for UK base rates at present is between 2-3%. We also expect the second half of this year to see at least 2 if not 3 rate rises as the economic trajectory continues upwards and the Bank of England finally realises the Brexit landscape is not one of armageddon but opportunity.

This is one of our most high conviction macro calls at Align for 2017 and we expect to see the pound north of 20 Rands to the pound in 12 months time and also approaching 2 Canadian dollars. In the latter’s case, with the likely bursting of their property bubble this year we do not see any rate rises on the horizon there in 2017 and so this is a particularly attractive pair to buy the pound against.

We also note that the latest CoT data as at 4 Jan 2017 revealed increasing short positioning once more in the GBP currency after a reduction going into the end of the year. Speculative money is always caught the wrong way on a trend at its extreme and we strongly suspect that this historical experience will play out here too. The only caveat to this call is as we go into the triggering of Article 50 – slated for spring of this year – this may bring a final short-lived lurch lower. Whether this lurch is from current levels or higher is of course unquantifiable and so we are to split our powder into 2 kegs in the event of such a move happening – taking a 50% position size long here. Sub 16 on the Rand and $1.57 against the CAD are complete “gimmes” to us whereupon we would apply our second 50% to the purchase of the pound v these pairs.