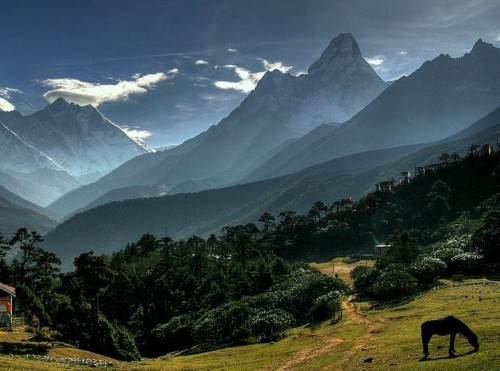 That I personally have been a bull of commodities for the past two years is no secret. Indeed, like many investors of a similar leaning it is safe to say that I have been veritably buried in eggs on my, none too pretty, face. I have also been somewhat lighter of pocket in maintaining this view the cheaper the asset class has become.

I suppose one could level the phrase “even a broken clock is right twice a day” at me by sticking resolutely to the bull view and the inevitable rebound that is presently taking shape. But there comes a time when the collective set up is so compelling that all the pain of recent years has to be psychologically scrubbed to allow an investor to “go again”.

This particular business has been set up by myself and other likeminded individuals mainly because we see such latent value and opportunity in the arena. That we are like kids in a sweet shop looking around globally at various investment opportunities is no understatement.

Having seen the drubbing of the so called “old economy” stocks in 1998-2000, the aftermath of the tech crash in 2001-03, and the global collapse in 2008/09, the value that I see in many natural resources stocks even surpasses these previous asset class meltdowns. Indeed, the very fact that this statement is likely to cause eyebrows to raise and probably elicit yawns all round actually shores up the bull stance. Sentiment is about as low as you can go.

While formulating this piece I came across a pretty amazing statistic and that is that the commodities basket (as represented by the CRB index) has returned – 5.3% p.a on a rolling 10 year basis at the most recent count. By any measure that is shocking, rivalling some of the worst periods in history for any asset class. As another saying goes – “the cure for low prices is… low prices” well, in my opinion, we have alighted upon the miracle cure at these prices and I am going to swallow the medication greedily. There comes a time when you simply have to bite the bullet. And I’ve got the bazooka, never mind the bullet, well and truly between my teeth.

Here is a list of 5 reasons why I believe, in the immortal words of the late 80’s pop star Yazz (showing my age now) that the only way is up:

1. Many blue chip stocks in the commodities sphere have fallen by 80-95%. Even Goliaths, such as BHP Billiton, with relatively strong balance sheets have not been immune. Other companies like Anglo American, Genel Energy, Vedanta and Kazakhmys have had their equity annihilated (much to the large shareholders’ chagrin, who have seen their net worth decimated).

Below  is a 10 year chart of the FTSE 350 Mining Index and we can see that (a) we are now below the nadirs seen in 2008 and (b) as the green line shows, we are on a technical basis now sitting on the multi-year support line from the early noughties. The index, given how underweight investors are in aggregate the sector, should now find material support. 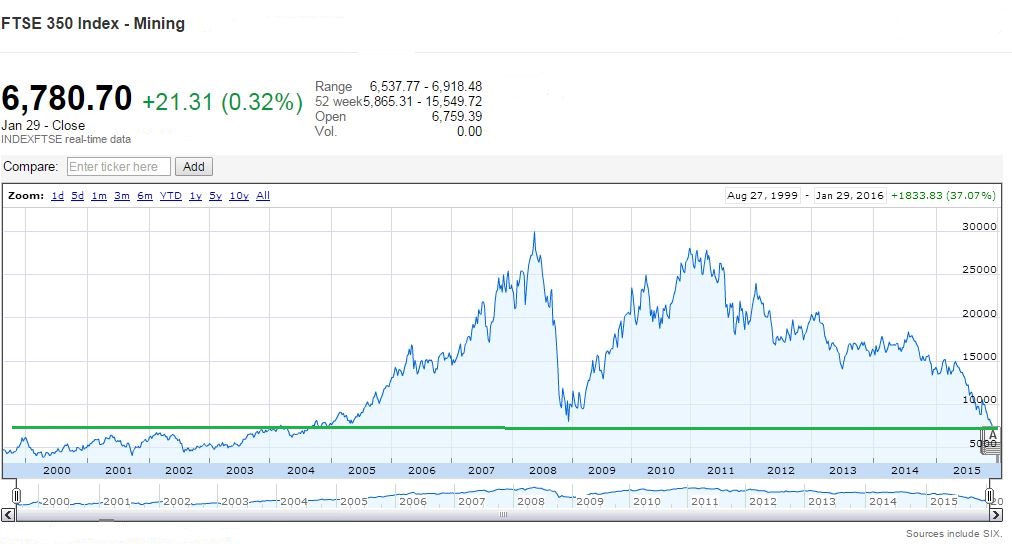 2. As alluded to above, investors globally are materially underweight in this sector. The investment community loves to recycle cash with regularity and as sure as night follows day, today’s underweight becomes tomorrows overweight. Given how beaten down the equity class is it will not take much in the way of purchasing firepower to set a light under many stocks. In my opinion I would not be surprised to see the most beaten down constituents of the 350 Mining Index, increase by 50-100%, with the likes of Anglo American and Glencore being in the vanguard. Their stock prices relative to book value trade for frankly fractions and so if the debt vs equity worries fade the rallies could likely be spectacular.

3. Picking up on the latter point in (2) above, many companies are now actively addressing balance sheet pressures – Glencore, BHP, Anglo American et al are setting the scene for enhanced investment cases. As I relay in (4) below, what with the supply cuts that the sector is making en bloc, compared with pared down debt components on the balance sheets, adding this to reduced underlying commodity supply = increasingly viable investment propositions.

4. Each commodity has its own individual supply/demand dynamics and it is inappropriate to lump all commodities together in this respect. However, there is growing evidence of us now being at peak production of gold and silver. Oil projects mounting to hundreds of billions of barrels have been cut on a wholesale basis as a result of the price tanking and many iron ore projects have simply been consigned to the bin. With regards to platinum (of which South Africa is the principal producer), the supply of this metal has been cut sharply and we expect there to be real shortages through 2017/18. As the market always “anticipates”, the progression of 2016 is likely to see the reality of these dynamics become ever more apparent. This can only result in rising underlying commodity prices.

With pared back debt profiles, as per (3) above, and the operational leverage inherent in most mining companies, the net end result is very likely to be much higher stock prices.

5. Something that has gone unnoticed in the mainstream media is the almost non-existent insider selling across the sector. Indeed, with the likes of Glencore raising serious eight figure sums and management putting in hundreds of millions of dollars of their own cash, the buy/sell ratio globally for commodity stocks is materially skewed to the buy side. At big turning points for asset classes historically the insider set have been almost infallible, if subject to a time lag. I like the odds on this point.