There was plenty of good news yesterday from Botswanan miner Cradle Arc which last year acquired a 60% stake in the Mowana Copper Mine in what we believe was a fantastic deal. The company bought this stake for a shade over £12m whilst a total of more than US$170 million had been invested in the mine to originally get it commissioned. Yesterday’s news concerned three important elements in improving the operational performance of Mowana including: an enhanced independent mineral resource estimate, an accelerated mine development plan and US$10 million of secured debt funding to replace existing onerous facilities.

The enhanced independent mineral resource estimate shows that resource grade has increased by 18% and the contained copper by 6%. This new resource model benefits from the team’s improved understanding of the potential at Mowana. But, more importantly, this model paves the way for incremental returns to be achieved as Cradle Arc moves towards achieving the initial nameplate capacity of around 12,000 tonnes of copper per annum.

The accelerated mine development plan will generate improved efficiencies and allow more rapid access to the sulphide and supergene ores, which have shown very good metallurgical recoveries. With the accelerated mine development plan there will be four mining units operating within the Mowana open pit which will serve to increase the tonnage being mined and delivered to be processed in the mill. Critically, this increase in run of mine production provides for improved blending allowing the company to build stockpiles of ore ahead of the planned implementation of the Dense Media Separator (DMS). Blending ores is very important as it allows the recovery of copper to be optimised.

The US$10 million of secured debt funding raised will finance the increased scale of the company’s mining fleet and accelerate access to the ore with a better metallurgical recovery. In addition, this new money will refinance Cradle Arc’s linked pre-payment facility which will led to lower borrowing costs and thus improve the company’s capital base. 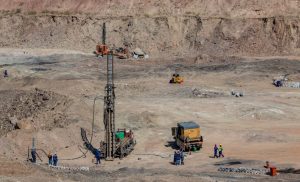 In a nutshell, these moves mark a big step forward for Cradle Arc which allows the team to really begin to fully exploit the true potential at Mowana. Cradle Arc now has the funds to increase production in the northern pit and to mine the more transitional and sulphides ores which have a far higher recovery rate. At the same time, the company has been able to buy itself out of an expensive prepayment facility with off-taker Fujax that had a 5% revenue royalty. All these factors result in accelerated development and optimisation of this highly compelling copper project.

Looking further ahead, at the time of this announcement Kevin van Wouw, CEO of Cradle Arc, commented that “…work continues on the definition of the maiden JORC (2012) reserve estimate, which will incorporate the planned process plant improvements so that, once we have achieved initial nameplate capacity at the current plant, we can look to build production to over 20,000 tonnes per annum via the planned DMS upgrades.  With a restructured and strengthened balance sheet and clearly defined accelerated development plan, we look forward to establishing Mowana as a major copper producer.”

Despite the obvious potential at Mowana, the shares have not performed too well since being re-listed, largely as a consequence of a particular dynamic in the market surrounding the convertible loan element. This has provided for new (and existing investors) entrants a renewed buying opportunity at a more attractive valuation but with a de-risked profile. We see value upto 28p per share per HERE and as our estimates below relay the stock trades on our forecasts on an exceptionally low multiple for 2018. Accordingly continue to rate the stock a clear Conviction Buy.

Both Align Research & a director of Align Research hold positions in the equity of Cradle Arc and are bound to Align Research’s company dealing policy ensuring open and adequate disclosure. Full details can be found on our website here (“Legals”).