Gaming Realms (GMR), the developer and licensor of mobile focused gaming content, has announced a brief but positive trading update ahead of its upcoming year end in December. Since last updating on 8th September, the positive trends seen in the first 8 months of the year are said to have continued. As a result, revenues for the full year are expected to be up by 55% at £10.7 million, with adjusted EBITDA of not less than £2.75 million.

This strong performance has once again been driven by the expansion of the company’s international partner base, the release of new “Slingo” games, along with improvements to technology. In the second half Gaming Realms went live with five new partners including PaddyPower Betfair in Europe, and launched 4 new Slingo games including Slingo Fluffy Favourites (below). In the highly prospective U.S. market, licences have been applied for in Pennsylvania and Michigan, with the company hoping to launch in these states during the first half of 2021. 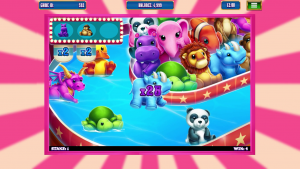 Slingo Fluffy Favourites – It’s the fluff that dreams are made of. Source: Company

While revenues for the full year are expected to come in slightly under our £11 million forecast it is highly encouraging to see that adjusted EBITDA is set to be ahead of our expectations for £2.47 million and up from a £0.3 million loss last year. This announcement also demonstrates that Gaming Realms’ strong operational gearing is starting to come through, with the 23.8% margin in H1 rising to 27.5% in H2. With more partners going live, the benefit of the first full year with recently added partners, and additional games added to the portfolio, we expect further strong growth in 2021. Our current forecasts are for £13.8 million of revenues and adjusted EBITDA of £4 million.

In our most recent update note on the company we noted the growth potential in the U.S. markets as more states legislate for legalised forms of gambling. Gaming Realms generated 56% of its sales from the U.S. in H1 2020 and flagged that the market is expected to grow at a compound rate of 17% from 2020 to 2025, rising to a value of $6.1 billion by 2025.

Along with New Jersey, where the company already has an operator’s licence, Pennsylvania and Michigan are two of the country’s most prospective markets. Pennsylvania’s Gaming Control Board recently announced that the state’s gaming operators generated combined revenue of $320.2 million in October this year, up 12.7% from September. Perhaps more importantly for Gaming Realms, online slots revenue soared to $40.3 million in October 2020 from $4 million in the same month last year. Meanwhile in Michigan, the state approved its gambling expansion plans last December and began accepting online licence applications this summer. At the start of this month, the state waived its right to subject the final draft of the online gambling regulations to further review, with the first licences set to be issued in early 2021.

Elsewhere in the sector we note the continuation of corporate activity, with London listed game developer Codemasters (CDM) recently agreeing a near $1 billion takeover by Take-Two Interactive Software. The price is at an enterprise value multiple of c.40.5 times Codemasters’ adjusted EBITDA for the year to March 2020.

Shares in Gaming Realms currently trade at 20.6p, slightly off the near 5-year high of 24.5p seen in October but well ahead of the 4.45p low seen in the depths of the coronavirus inspired sell off in March. Our peer derived valuation of the shares remains at 39.4p, implying 91% upside from current levels. As such, we are happy to retain our stance of Conviction Buy.