Aside from a global pandemic and an upcoming recession likely to be the largest in living memory, the world still has other problems to deal with. Not least in the areas of energy, for which there is a growing demand, along with the management of waste. Many companies on the London markets have developed systems to deal with both of these matters simultaneously, with so called “waste-to-energy technology” able to take waste and convert it into fuel and power via a variety of different methods.

To give some high-level figures, the World Bank estimates that population growth and urbanisation will result in annual solid waste generation increasing by 70% from 2016 levels to 3.4 billion tonnes in 2050. On the energy side, BloombergNEF’s New Energy Outlook 2018 report forecasts that global electricity demand will reach around 38,700 terawatt-hours by 2050, up from 25,000 terawatt-hours in 2017. To highlight the value of opportunities in the waste-to-energy sector, a report published in October 2018 by Research Nester forecast that the global market will grow at a CAGR of 5.7% to 2024 to reach a value of $42.5 billion.

Given these trends, it’s no surprise that many companies in the renewable energy sector have actually seen decent share price gains so far in 2020, despite the market malaise seen in February and March caused by fears over the coronavirus pandemic. The table below (Source: Sharepad) shows the share price performance in 2020 to date for all the AIM listed renewable energy companies. 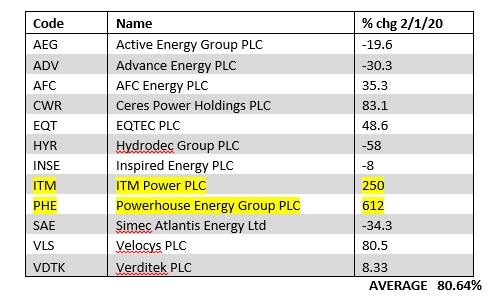 On a simple average basis the 12 companies have an impressive mean share price return of 80.64%. However, remove the two outlying triple digit gainers, Powerhouse Energy and ITM Power, and the average gain of the remaining ten companies falls to just 10.56%. The performance of these two companies is therefore worth a closer look.

ITM Power (ITM) is the largest renewable energy company on AIM by market cap and the tenth largest company on AIM as a whole. The company entered the billion pound market cap club earlier this year, with the shares having risen from 33p to over 300p over the past 12 months.

ITM is an energy storage and clean fuel company which manufactures integrated hydrogen energy systems for grid balancing, energy storage and the production of renewable hydrogen for transport, renewable heat and chemicals. Its own specialist focus is on the hydrogen economy, an area which many governments around the world are keen to promote given the element’s use as a practically emission free fuel.

Newsflow over the past year has been impressive, with highlights including a £58.8 million fundraise in October 2019 and a joint-venture with industrial gases and engineering giant Linde to focus on delivering renewable hydrogen to large scale industrial projects worldwide. A range of other agreements have also been announced, showing that, after many years of disappointment, ITM is now successfully commercialising its technology.

Yet, the valuation seems to be out of kilter with the fundamentals. ITM is now capitalised at £1.34 billion – round about the same as FTSE 250 companies like JD Wetherspoons and WH Smith. The most recent results, interims to end October 2019, showed revenues of only £2.4 million and a loss from operations of £9.8 million. Given the recent announcements however, the historical finances aren’t as important as the future pipeline. As at the date of the results (27th January) the total backlog of orders was said to be £42.4 million, amounting to £16.3 million of projects under contract and a further £26.1 million in the final stages of negotiation. In addition, the qualified tender opportunity pipeline was over £248 million, but obviously not all of this will turn into sales.

These are big numbers in relation to the historic performance but still don’t seem to justify the current market cap. Reflecting this, just after the results German equity analysis outfit First Berlin Equity Research issued a sell stance on the shares, having a 105p DCF based target price. Its comment, “Although we welcome ITM’s positive strategic development, we believe that the valuation is too far ahead of the company’s commercial progress.”, seems to sum up the situation here. Yet, the shares currently trade 170% above the broker’s target. For holders of the stock, we believe it is time to bank these profits and expect gravity to reassert in the weeks ahead. 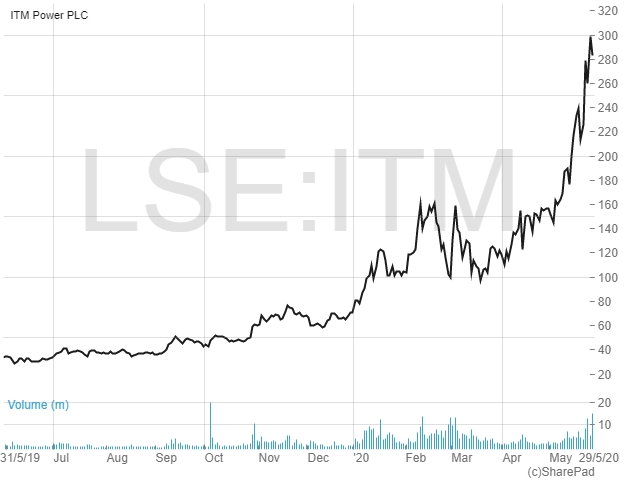 While ITM is now proving it can commercialise its technology, one company which is still making slow progress is Powerhouse Energy (PHE). PowerHouse has developed a technology known as DMG® (Distributed Modular Gasification) which can take waste plastic, end-of-life-tyres, and other waste streams, and convert them into a synthesis gas (syngas) from which products such as chemical precursors, hydrogen, electricity and other industrial products can be produced. The DMG® process can generate up to 2 tonnes of road-fuel quality hydrogen fuel, and more than 58MWh of exportable electricity per day.

While problems with the technology seem to have been solved over recent years, its commercialisation however remains painfully slow. Powerhouse’s most recent numbers, for the six months to June 2019, showed an operating loss of £0.87 million on no revenues, although some were expected in the following period from some engineering consultancy work.

Operational newsflow has been sparse this year, with the last significant statement coming on 9th March. It was positive however, with Powerhouse signing an option to enter into an exclusive agreement for the development of DMG® Technology in the UK with Peel Environmental, a company which owns and develops waste infrastructure projects and has achieved consent for a range of energy infrastructure schemes.

If the option is exercised, Peel has committed to lead the engagement with all potential end customers for UK based DMG® plants and will facilitate or help facilitate the development of the plants in accordance with the customers’ commercial requirements. However, the deal is conditional upon the completion of Powerhouse’s mooted acquisition of development partner Waste2Tricity which has been dragging on since just before Christmas.

In terms of income, if Peel exercises the option Powerhouse will receive £0.5 million as a one-off fee and then on an ongoing basis will receive an annual licence fee of c.£0.5 million for each DMG® plant that Peel develops, payable annually when each unit becomes operational. Additional fees from technical engineering services and maintenance contracts are also possible. Powerhouse is also looking to sign similar agreements with development partners on a country-by-country basis.

Despite the lack of newsflow in recent months, Powerhouse shares have soared from just under 1p at the start of April to 3.625p currently. This capitalises the company at £75 million and indeed in excess of £100 million adjusted for the Waste2Tricity stock to be issued, astonishing for a business with no revenues, accumulated losses of £61.1 million and net assets of just £184,379 as at the last balance sheet date. We believe the share price rise has been as a result of no more than a concerted promotional effort. PHE is now a raging SELL in our opinion.

Meanwhile, followers of Align Research may be familiar with EQTEC (EQT), a renewable energy company which has been making good commercial progress but continues, in our view, to look considerable undervalued. We updated our coverage and forecasts on the company back in March.

In summary, EQTEC provides engineering & design services, operations and maintenance services, and sells its flagship EQTEC Advanced Gasification Technology to waste-to-energy operators and enterprise partners. Its business model is focused upon sourcing and providing assistance to clients in developing waste elimination projects, typically projects that have a local supply of waste which can be disposed of and turned into energy. The company works together with multiple partners involved in projects, including developers, waste owners, EPC contractors and financiers, with a view to ultimately providing its advanced gasification technology and associated engineering and design services.

Meanwhile in Europe, EQTEC earlier this year signed a Collaboration Framework Agreement with German EPC company ewerGy for the development of a portfolio of projects in Greece and the Balkan Region. The two parties will focus their efforts to develop a selected project portfolio in the region and to use EQTEC’s Advanced Gasification Technology in projects. One project is already underway in Greece, with 13 potential new projects in the Balkan region having now passed the initial due diligence phase and falling under exclusivity under the deal with ewerGy.

EQTEC recently announced a positive operational update, which we assessed HERE. In summary, it reported continued progress over the past few months with the current project pipeline, despite the coronavirus pandemic, with full detailed commercial offers, with an aggregate potential sales value of c.€120 million, made during the period.

We have a peer derived EV/EBITDA multiple based target of 0.78p on EQTEC shares, implying upside of 200% from the current price of 0.26p. Reflecting the low valuation in relation to peers, EQTEC currently has an enterprise value of c. £12.25 million. This is in stark contrast to Powerhouse Energy which currently commands an EV of approaching £100 million post the W2T issuance. In our view, Powerhouse’s much higher valuation does not reconcile with the fact that it remains pre-revenue and that EQTEC has a substantially larger pipeline of profitable commercial projects lined up. Should EQTEC trade on the same EV as Powerhouse then the value per share would be over 2p per share.

We would also like to address the misconception surrounding the overhang of stock in the market ref EQT. One of the 2 primary holders are Inava – see HERE regarding their last disclosed holding. As there has been no TR1 here in recent months since January then it is clear that Inava have not been material sellers. We understand that the primary sellers have been in fact Ebioss.  They have been forced to sell near almost all their shares as a consequence of a restructuring and so have been the likely primary influencer of the decimation in Eqtec’s market capitalisation during the last several months, creating the complete disconnect in the company’s valuation relative to its operational progress.

With regards to Altair, we can confirm that they remain a key strategic stakeholder and have not been a seller of shares at all. The final piece of the puzzle is Riverfort/Yorkville’s holdings and we can relay that we have been active buyers of their shares this last few months. The volume and price action on Friday should not be ignored – it seems that the market now has the sniff that the Ebioss overhang is now almost gone. Sans this, it strikes us that the stock is now in a prime position to react to the underlying material operational progress that CEO David Palumbo is spearheading and whom we have a very high regard for.

Of course, there remains execution risk involved in EQTEC meeting our forecast figures, with the potential for projects to be delayed being a major constituent of this. However, as we have seen in the past, the shares have been responsive to positive announcements to the market. With the potential for a strong flow of news combined with the stock overhang that has plagued the stock for months almost gone, we see a number of possible catalysts for the shares throughout the year and thus are even more confident in our stance of Conviction Buy.