I was very surprised to see the stock price of Genel rewind from the 150p level at which they were trading only mere weeks ago to the lows of 85p this afternoon (28th July) – that is knocking on for a 50% decline in a very short space of time. 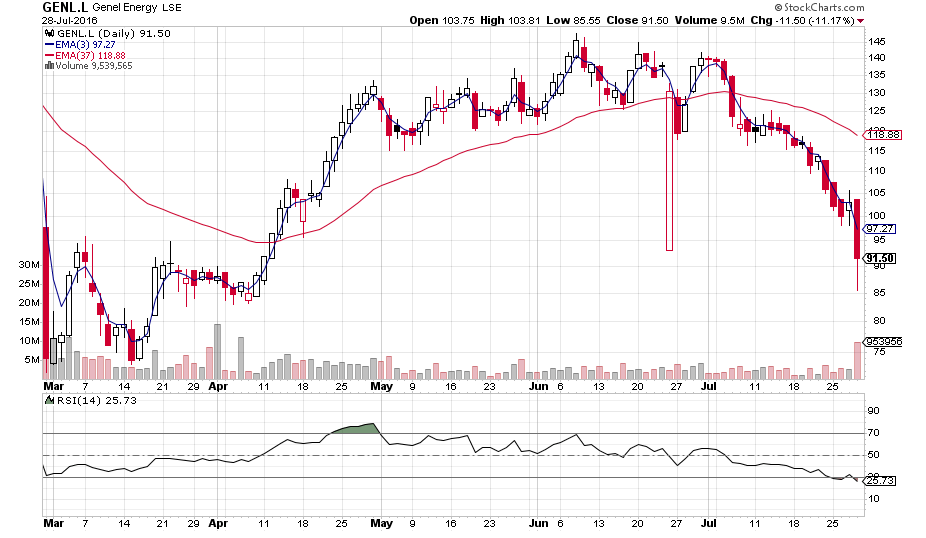 Try as I might I cannot see anything in this morning’s half year results that justify the scything of the market capitalisation during July notwithstanding the oil price declining from approx $50 a barrel to just over $42 as I write (Brent contract used as benchmark). Indeed, in today’s results the company stated that the average realised price for the oil produced from their Taq Taq and Tawke fields over the first half of 2016 was $35 and $28 b/bl – a discount of $5 & $12 b/bl respectively to Brent. Management are also forecasting in their outlook for the second half a Brent price of $45 b/bl. I personally think this a good conservative base to work from.

Given the average of $40 b/bl seen during the first half, should the oil price rise back towards $50 b/bl as we now enter the hurricane season and also approach the Northern hemisphere winter, there will be a good operational gearing effect to the Company’s EBITDA and commensurate cash flows. The call in this piece depends of course on where you see oil over the next 12-24 months. $50 b/bl and above and the stock looks a steal to me. A revisit to the old lows of late $20’s b/bl and yes there is further downside. My money’s in the restricted supply camp going forward and a new oil price band of $40-60 b/bl.

To me, the valuation of Genel at 90p per share is just plain wrong and I am thankful that “Mr Market” has given me another opportunity to re-invest at what I consider a “steal” valuation. The raw figures that support this stance are as follows:

Market Cap of $330m (based on current FX rates)

Receivables due from the KRG of $412m

The above puts the stock on an EV:EBITDA multiple of just over 4 times and a discount to book value of near 87%. Should the receivable be ultimately paid then the Enterprise Value is just $154m based on today’s figures – a shade over 1 times pro forma EBITDA and that based on a depressed oil price!

There are risks for Genel, not least the continued large outstanding receivables figure due from the KRG and of course the area of operations of the Company’s oil and gas fields which, as we can see in the image below, are perilously close to the scourge of modern day society – the abhorrent and so called ISIS. However, whichever way I cut it, the valuation figures above, particularly assuming a progressive run down of the receivables figure are just simply too cheap. It is worth stressing that unlike the other major player in the region – Gulf Keystone Petroleum (which is currently in the process of handing over their assets to the bond holders) that the balance sheet of GENL is not stressed and this was evidenced by their buying back approx $55m of outstanding bonds at a decent discount to face value earlier this year. 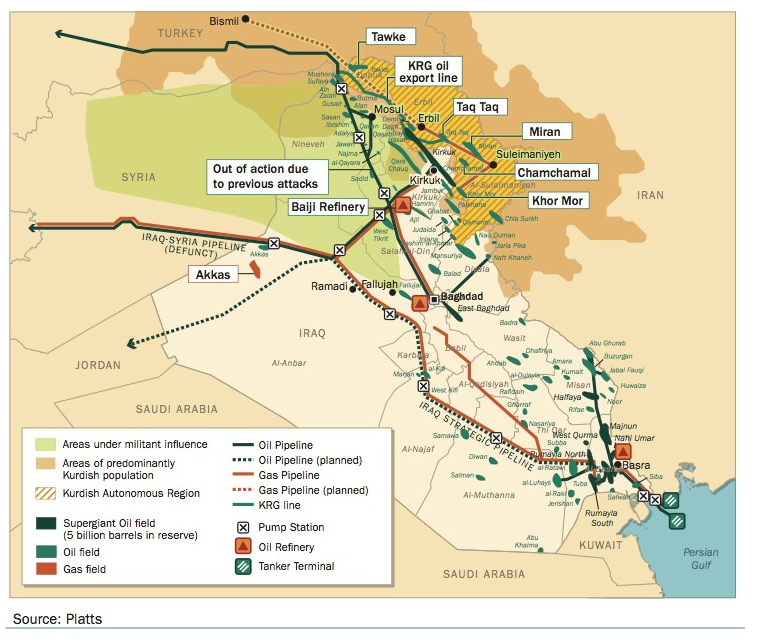 Under any scenario north of $50 b/bl oil and a decent tail wind with their gas monetisation program the shares, trading at 90p at the time of writing, look to offer tremendous value to me and I personally target 160 – 200p on a 12 months view.