I last wrote about GKP HERE in which I highlighted that there was “value” potentially to be found in the capital structure of GKP and in particular the Convertible bonds. As it turned out, the proposed restructuring agreement handed the lion’s share of the company value to the Senior note holders with the Cnv bonds holders having a seat at the table and the crumbs being left for the Ord shareholders (and for which they potentially have to stump again per the open offer element of the restructure proposal).

In recent days the stock price has risen from the lows of c.2.5p and set the bulletin boards alight with a multitude of theories. Here are the reasons we see for the rise:

To conclude, we personally see the equity as too risky to purchase at this level and indeed open to a sharp downwards de-rating in the event that the restructuring agreement is voted through (and I would be absolutely amazed if it wasn’t). The senior bonds are probably too expensive to purchase due to the minimal nominal amount required ($200,000) for all but the most well heeled of investors (but we do still see value in them even after the rise back to par given the sheer cut of the equity they are taking). So that leaves the convertible bonds…

At a recent price of 24c on the dollar and assuming a purchase of the minimum $200,000 nominal, the holder of these bonds will receive approx 2.8m Ord shares on the restructure. Cost of this at the current FX rate is around £36,000. With the equity current trading at 5.6p then these shares are worth approx £156,000. This is a massive arbitrage opportunity but before you go out and try to put the arb on there is one glaring problem – that is that the underlying stock is currently unborrowable! Should the restructuring agreement not be voted through then you would actually win in this instance however with a 100% hedged arb as you would make £156,000 on the equity short whilst potentially losing £36k on the bonds (should the Senior note holders take all the value and there be nothing left for the convertible holders).

In the alternate, should the equity be bid for as has been speculated, then depending on the bid level your losses are open ended on the short equity side whilst the gain is capped at @ £113,000 on the bonds. In fact any such bid would need only to be north of 10p to incur losses. There is no guarantee the Conv bonds would trade towards par too. However, I reiterate that I personally see a bid for the equity as a real rank outsider.

All the above being said, for the convertible bonds to thus lose a holder money the stock would have to trade below 1.28p on a post restructure basis at the current offer price of 24c on the dollar. With c.23bn shares in issue this equates to an equity value of c.£300m. I personally expect the stock to trade with a cleaned up balance sheet with a value of around 5-6 times cash flow which would be approx £700m depending upon the price of oil assumed. Remember also that at the peak the company’s value was approaching £4bn. Consequently, we see value in the Convertible bonds up to 40c on the dollar. 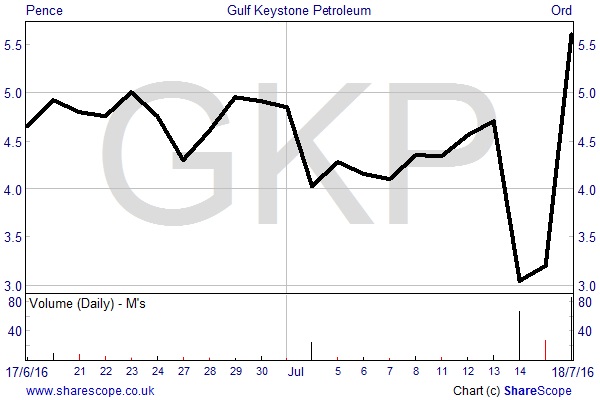 CLEAR DISCLOSURE – The author of this piece holds a long position in the Gulf Keystone Convertible bonds.