It’s been a good ride for investors in Nasdaq listed krill oil specialist Acasti Pharmaceuticals (ACST) since we published our LATEST ANALYSIS on Monday this week. Trading at 1.29 cents at the time of our article, the shares rose to a peak of 2.25 cents before settling to the current level of 1.56 cents. That capitalises the business at c.CAD$57 million. However, as we mentioned previously, we ultimately believe that Acasti could command a valuation of up to $1 billion, seeing potential upside of c.10-20 times on an 18-24 month timescale should flagship product CaPre come through Phase 3 trials successfully.

As a reminder, Acasti is pioneering a less controversial and hopefully less harmful approach to the treatment of the condition of severe hypertriglyceridemia (“HTG”) relative to statins through the use of super concentrated Omega 3 fatty acids, derived from the oil of deep ocean krill crustaceans. Omega 3 fatty acids have been found to have a number of positive health benefits, with there being extensive clinical evidence of safety and efficacy in lowering triglycerides (TGs), a type of fat found in the blood which can act as a marker associated with the risk of heart disease and stroke. Multiple studies have suggested that patients with severe hypertriglyceridemia are at a greater risk of coronary artery disease and pancreatitis.

Currently in Stage 3 trials, CaPre has already, in Phase II clinical trials, shown that it can significantly lower TGs in patients with mild to severe HTG and also potentially lower “bad” cholesterol (low-density lipoprotein, or LDL-C) – which can build up in the artery walls, leading to disease of the arteries. This is a large area of the pharma market to go for, with analysts from research firm Visiongain suggesting that the global cholesterol-lowering industry was worth $19.2 billion in 2017 and forecast to grow 4.9% every year for the next five years.

Amarin is a biopharmaceutical company focused on the commercialisation and development of therapeutics to improve cardiovascular health. In July 2012, Amarin received FDA approval in the US for its first product, Vascepa, an ultra-pure, omega-3 fatty acid product, for use as an adjunct to diet to reduce triglyceride levels in adult patients with severe hypertriglyceridemia. Vascepa is pure eicosapentaenoic acid (EPA) derived from fish oil and has been shown to have a number of advantages over common fish oil supplements sold over the counter.

Vascepa, along with diet, is clinically proven to lower very high triglycerides in adults by 33% without raising levels of bad cholesterol and is the only Pure EPA Omega-3 prescription clinically proven and FDA-approved. In the 2017 financial year Vascepa made sales of $179.8 million, with Amarin making a net loss of $67.87 million.

Shares in Amarin have been trading in a range of around $1 to $4 over the past five years. But as the chart below shows, since 24th September this year the shares have exploded, from c.$3 to the current $18.20. 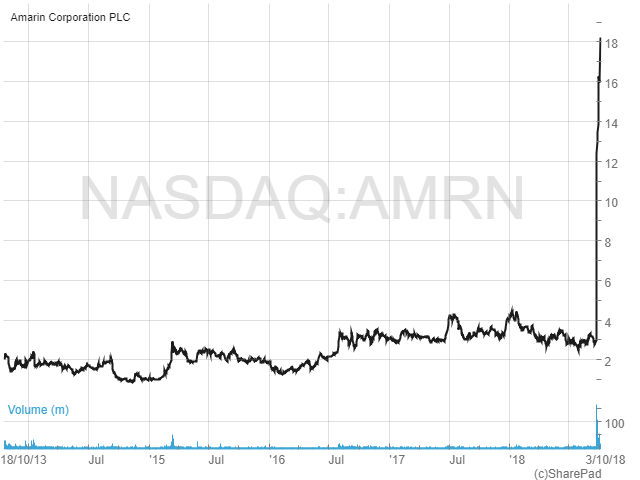 The catalyst for the sharp rise was the announcement of results from the company’s Phase 3 REDUCE-IT cardiovascular outcomes study. This was set up to evaluate the effectiveness of Vascepa as an add-on to statin therapy in reducing the first major cardiovascular event in a high-risk patient population compared to statin therapy alone. In simple terms, the study was looking to see if Vascepa could reduce heart disease and thus open up a whole new potential market for the drug.

Cardiovascular disease is the leading cause of death in the US, with the estimated costs of treating heart attacks, strokes and other diseases exceeding $300 billion annually. More than 35 million patients in the US are treated with statins for the primary and secondary prevention of atherosclerotic cardiovascular events, including myocardial infarctions (heart attacks), and stroke. Despite the demonstrated clinical benefits of lowering LDL-C with statins, significant residual cardiovascular risk remains for statin-treated patients so there is high demand for a safer alternative.

Beginning in 2011, the study enrolled and followed 8,179 randomised patients who had elevated levels of triglycerides, either established cardiovascular disease or diabetes, and were using statins to control cholesterol (LDL-C) levels. The hypothesis was that taking Vascepa on top of existing statin therapy could provide a significant incremental reduction in cardiovascular events.

Attracting investors’ attention was that the topline results showed the study met its primary endpoint, demonstrating a highly statistically significant c.25% relative risk reduction in the first occurrence of major adverse cardiovascular events (such as cardiovascular death, nonfatal myocardial infarction, nonfatal stroke and hospitalisation due to angina) with use of Vascepa 4 grams/day as compared to a placebo.

It is worth pointing out that Amarin has been keen to show that its highly-purified, omega-3 fatty acid product could distinguish itself from the wider fish oil supplement field. Thus, these results are highly positive in that they show a reduction in cardiac risk, in contrast to the recently reported ASCEND trial which found that fish oil supplements do not prevent heart attack or strokes in people with diabetes.

The key point is that following the results Vascepa could be applied to a whole new market and a much broader range of patients. Analysts at Jefferies have commented that a successful trial could transform Vascepa into a $2 billion-plus drug – that’s more than 10 times its historic annual sales. Of course there are further hurdles to go through before the drug is approved for further applications, not least FDA clearance.

More extensive data from the study data will be presented by management with both the medical community and regulatory authorities at the 2018 Scientific Sessions of the American Heart Association (AHA) in Chicago 10th November. Additional updates on the REDUCE-IT study results are also planned in a peer-reviewed publication.

Back to Acasti, we highlight the potential for a sharp rise in the share price, as per Amarin, on the back of its own CaPre Phase 3 trial, with topline results currently expected to be reported before the end of 2019. If the Phase 2 trials are anything to go by then the efficacy of the product is likely to be firmed up, with dosages of 1g, 2g and 4g all showing there is a material reduction in harmful triglycerides and a non-deleterious effect on so called “good” cholesterol – HDL.

What’s more, the positive REDUCE-IT trial results read over well for Acasti, with the company saying in presentations that it believes there could be a 10 fold increase in potentially treatable patients for a variety of other entrenched health markets, including the diabetes and obesity epidemics. This assumption is based on positive results from REDUCE-IT trial and also the STRENGTH trial, sponsored by AstraZeneca, due to report in 2019. 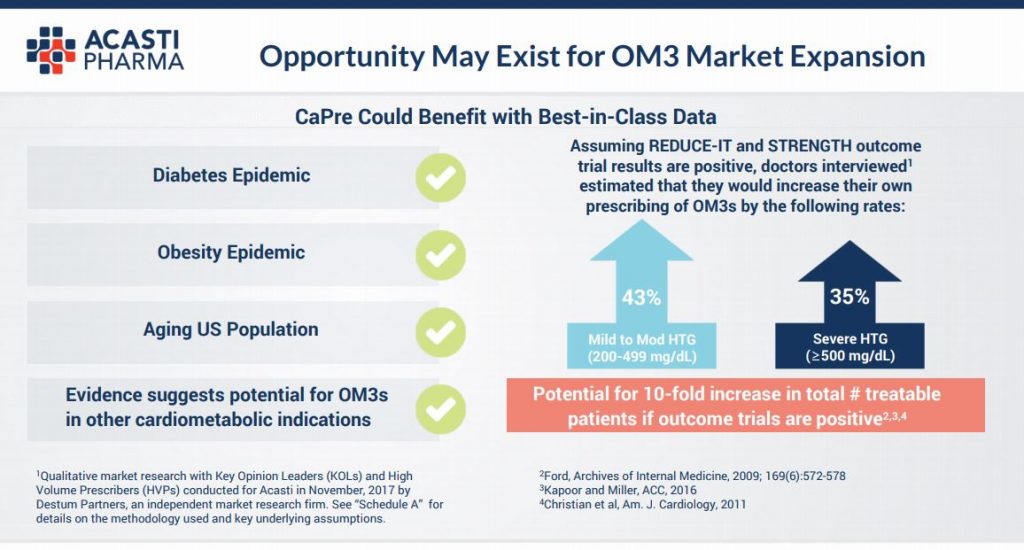 Further rationale for our positive outlook on Acasti was set out in our PREVIOUS ARTICLE so we won’t repeat it here. However, we make one more point to highlight how cheap the stock looks at current levels.

At the current share price of US$18.2 Amarin has a market cap of just under US$5.4 billion. This is c.125 times higher than Acasti’s valuation of CAN$55.7 million (US$43.3 million). Granted, Amarin is a few steps ahead of Acasti, it having an FDA approved product and the successful results from the Phase 3 REDUCE-IT trial to build on. But with Acasti being poised to reach similar milestones within a couple of years, perhaps with a better product, the valuation discrepancy does look like it could be rapidly narrowed over the coming months and years.

Given the stock raise that was taken up very quickly by solid investors today of a further $16.6m this will, in our opinion, put the company on a firm financial footing to progress through the Phase 3 trials & put them in a strong position ref commercial licensing deals in play that the company alludes to in the release today. The stock price reaction post this, in contrast to other raises, is noteworthy too with a near 50% rally as we type indicating that the market is looking to re-rate this stock. We repeat our Buy recommendation with a short term $2.50 price target. 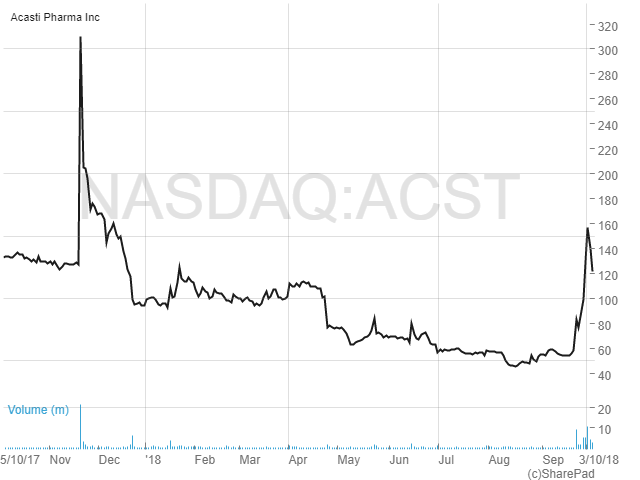 A director of Align Research own shares in Acasti Pharma. Full details of our Company & Personal Account Dealing Policy can be found on our website http://www.alignresearch.co.uk/legal/