Since our initial highlighting HERE of the long ALBA/short JAY opportunity on 1 April this year we can see in the chart below that those that followed our suggestion have veritably “made hay” with the price of ALBA increasing by near 60% at one point last month whilst JAY has fallen by just under 30%. 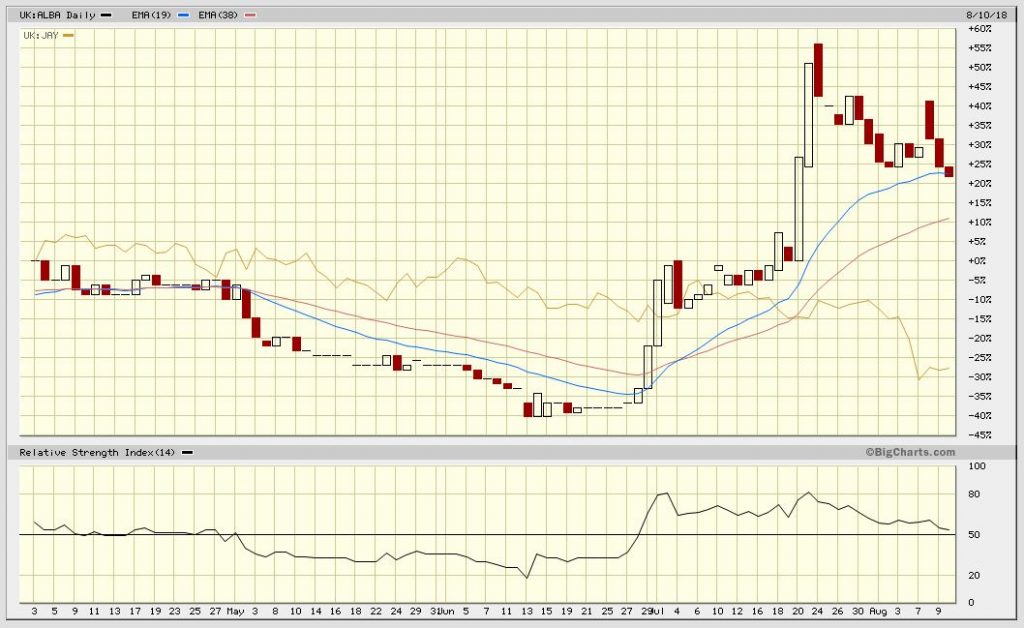 We believe that this outperformance is set to continue for the following reasons. Firstly, there seems to be an expectation in some quarters of the City that JAY are to announce an offtake agreement shortly. IF this comes to pass it will only serve to highlight the glaring disjoint in the value of Alba’s Thule Black Sands licence area which is, contrary to the assertions by the JAY cheerleaders, adjacent to their Dundas licence area and largely of the same ilmenite grade. IF there are buyers for JAY’s product you can bet your bottom dollar that there will be buyers for effectively the same product from ALBA. In this instance then, given the still de facto nil value in Alba’s market cap for their Thule ilmenite product, it is, we would posit, a “heads I win, tails you lose” proposition for Alba relative to JAY as the re-rating from a near nil value in the present market cap of ALBA for this element of their portfolio would be much, much more than JAY’s which is still, incredibly, valued near £200m today.

Secondly, as per the RNS HERE released in July of this year, work is progressing apace at Thule with a view to converting their resource into the all important JORC compliant basis. We believe this will be transformational for the stock price for 2 reasons. Firstly, any commentary as to the supposed inferiority of the product relative to JAY’s will likely be put to bed once and for all and secondly, the release of a JORC compliant resource estimate typically acts as a major re-rating inflection point for junior miners as the path to commerciality progresses.

It is worth reminding ourselves of the key elements of that RNS in July:

“We are excited to get back into the field shortly for our first full field campaign at Thule Black Sands, whilst also embarking on our maiden campaign at Inglefield Land, a project which contains targets for a suite of commodities, including cobalt, gold, zinc and nickel. We will be able to benefit from logistical cost savings in exploring both sites in north-west Greenland at the same time and look forward to reporting material results as and when they are available.” As we highlight in bold, there is the added potential of finds at Inglefield including the commodity du jour cobalt.

And “… Alba is pleased to report that a drilling and sampling campaign has been planned across the full licence strike length with the aim of allowing the delineation of a maiden mineral resource statement for the TBS Project.”  We would expect that the results of this sampling will be released some time in September or October as the field season in NW Greenland comes to a close and so those looking to position for this news should be stake building now.

In summary, any expectation of an offtake deal at JAY has now been well flagged and as the saying goes in the stock market – “it is better to travel than arrive” so we doubt there would be much of a move in that stock, particularly as, per our piece HERE highlighting 8 key questions to CEO Rod Mcillree (which incidentally have gone unanswered to), the current market cap is, we believe, way out of sync with any realistic DCF valuation. Indeed, the price action last week in which JAY fell by near 25% on the day illustrates just how much leveraged capital looks to remains in the stock – capital that is no doubt looking for a profit-taking opportunity. In contrast however, even if JAY deflates towards what is a realistic level we believe of circa 5p per share, this would still, if ALBA were to be given a similar value, involve a four fold increase in the price of ALBA EXCLUDING their other assets.

To conclude, we continue to believe that the current stock price of ALBA provides material opportunity on numerous fronts – the disjoint with their quoted peers re the Horse Hill oil project, the opportunity as laid out here re relative valuations with JAY and also the other mining assets within ALBA’s portfolio that are, based on a simple SOTP valuation, presently valued at de facto nil in the current market cap.

We remain resolute holders of ALBA and look forward to the modest re-rating that has occurred in recent months to build apace as we move through the autumn.