In March this year the company revealed that the European Patent Office had granted a patent covering key RNAi chemical modifications, thus giving it further protection for its technology across many European countries. The company believes that this technology is relevant to third party medicines in ongoing clinical trials for conditions including, but not exclusively limited to, Hypercholesterolemia, TTR-mediated Amyloidosis, Haemophilia and Acute Hepatic Porphyrias.

Silence has now further expanded its patent estate by filing additional divisional and continuation patent applications in Europe and the US which it believes are also relevant to the third-party medicines above.  The patent filings are in line with the company’s core strategy of growing its intellectual property portfolio, with a view to potential licencing opportunities with third parties. We note comments from CEO Ali Mortazavi that, “we believe that several third party late-stage clinical RNAi candidates, including lipid nanoparticle and GalNAc based products, require licences under our patent portfolio”, thus providing further revenue generating opportunities for the company – Silence already has licence agreements for its IP with partners including Quark Pharmaceuticals and Novartis.

Chemical modification technology, such as that developed by Silence, is vital to prevent the degradation of therapeutic short interfering RNA (siRNA) molecules and to improve the impact on the performance of RNA interference (RNAi) based drugs.

On the back of the news Silence Therapeutics shares have advanced by 4.4% as we write to 89.75p. They have recovered from recent lows of 72.875p seen in early May, with the company now capitalised at £62.82 million.

The last reported net cash figure (as at 31st December 2016) was £39 million, which rises to £43.4 million if we add in the value of Silence’s stake in US listed Arrowhead Pharmaceuticals (ARWR.NASDAQ) – Arrowhead shares currently trade at a similar price as at 31st December when they were marked to market. Thus, the markets are valuing the Silence Therapeutics business, which incorporates the valuable intellectual property portfolio and programme of clinical trials, at just £19.42 million – read our full initiation blog here for more details.

We re-iterate the potential for corporate activity in the sector, believing that Silence Therapeutics’ current valuation is likely to put the company on the radar of a number of potential suitors, whether they be in the RNAi field already or looking to enter the sector by buying a valuable portfolio of RNAi technology. The current enterprise value should prove to be no problem for larger pharma industry players to pay, for example market leader Alnylam Pharmaceuticals (ALNY.NASDAQ) had cash & marketable securities of $740 million as at 31st March 2017.

We believe that as newsflow emerges over the next 12 months there could be a return of multiples of the present price and a very real possibility of being acquired, with downside cushioned by the cash pile. We retain a Conviction Buy stance. 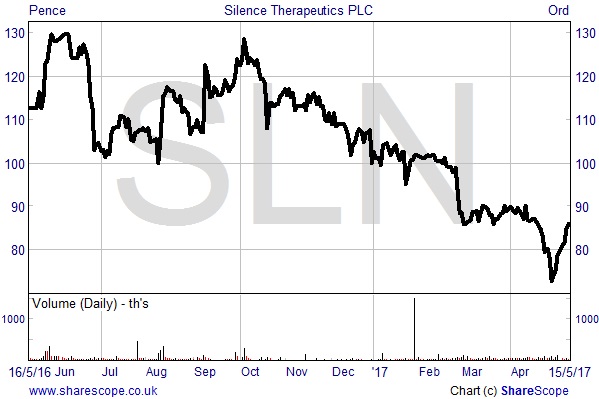